Earlier this week, Zee Studios had announced that they have signed Ali Abbas Zafar to helm a trilogy: "Mr India", based on the 1987 Shekhar Kapur-directed movie

Actor Sonam Kapoor Ahuja on Saturday said it is disrespectful that the original creators of the cult classic "Mr India" haven't been involved and consulted for the remake of the film, to be directed by Ali Abbas Zafar.

The makers chose not to comment on Sonam's post, however, a source close to the project told PTI, "We have the blessings of Boney Kapoor". Soon after the actress was trolled and Netizens questioned her 'Did you have a word with Boney Kapoor' (who is the producer of the new trilogy & also the producer of original Mr India) before putting out the tweet?

One user wrote: "fyI @BoneyKapoor  is conproducing so he must be bothered as he has rights to the films , @aliabbaszafar @ZeeStudios_  ki kya galti mam" [sic], while another said, "Why didn't you tag Ali then?? And also boney Kapoor who's the producer for this one too. Gharwalo se baat nahi karte Kya tumlog?" [sic]

Clarifying the many tweets, Sonam Kapoor said that her father — Anil Kapoor did speak to his brother Boney Kapoor about it and they are still "confused" about the announcement.

My father did have a word with him actually. 😄 we are all still very confused about how it was announced. https://t.co/sBVwvf4tdy 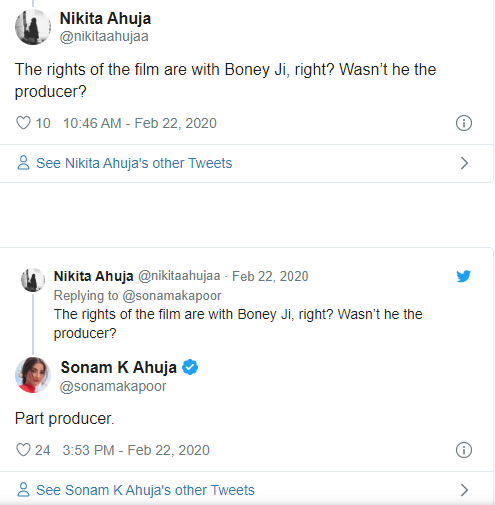 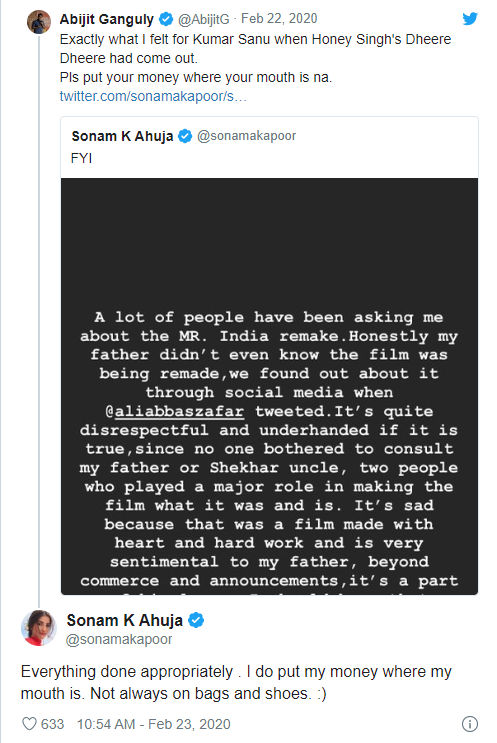 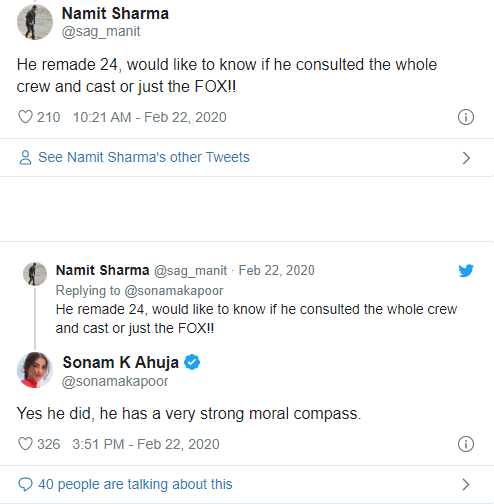 Earlier this week, Zee Studios had announced that they have signed Zafar to helm a trilogy: "Mr India", based on the 1987 Shekhar Kapur-directed movie, which featured Anil Kapoor as Mr India and late Sridevi as a journalist. "A lot of people have been asking me about the 'Mr India' remake. Honestly my father didn't even know the film was being remade, we found out about it through social media when @aliabbaszafar tweeted.

"It's quite disrespectful and underhanded if it is true, since no one bothered to consult my father or Shekhar uncle, two people who played a major role in making the film what it was and is," Sonam wrote on Instagram.

The actor said the original creators should be respected and one shouldn't encash on the popularity of "Mr India". A day after the trilogy was announced, Shekar had also expressed his displeasure over the project.