Nikhil Dwivedi, Kangana Ranaut Argue Over The 'good And Bad' Of Bollywood

Kangana Ranaut and actor-producer Nikhil Dwivedi got into a war of words over the 'good and ugly' side of Bollywood film industry.

Kangana Ranaut and actor-producer Nikhil Dwivedi got into a war of words over the 'good and ugly' side of Bollywood film industry. In response to Kangana's "industry wasn't created only by Karan Johar/his father" statement, Dwivedi said, "We have also bought tickets for your films, but if you do something wrong or right tomorrow, we can neither blame the whole film industry nor we praise them.'

Kangana within no time hit back at Dwivedi and wrote, "What did you build? Item Numbers? Most of the sleazy films? Of drugs culture? Treason and Terrorism? The world laughs at Bollywood. It is a mockery everywhere in the country. Dawood has also earned money and name, but if you want honour, then try to earn it, don't hide behind black tricks."

Putting his point forward to Kangana's statement, Nikhil wrote, "If this was such an absurd place, what attracted you? You stayed here even after suffering so much. You must have seen something here right? We see the same thing right?" To this, Kangana wrote, "Yes, I was attracted. But because of the mafia which is persecuting and oppressing people here. They are bound to get unmasked someday and they are"

Dwivedi, who disagreed with Kangana's statement said, "I too came from outside like you, but did not get as much success. The talent and hard work you put in was more than me. But nobody stopped me from being successful, and nobody will stop you either. That's why you are what you are."

Kangana concluded the conversation by saying, "You are right, We all live for ourselves, whatever we do, we do it for ourselves, but sometimes, some face so much difficulty in life that he is free from every fear. The aim changes, it happens, this is also true."

The argument between the two actors was triggered after Kangana slammed Jaya Bachchan's statement made in the Parliament about the film industry being ‘defamed’. 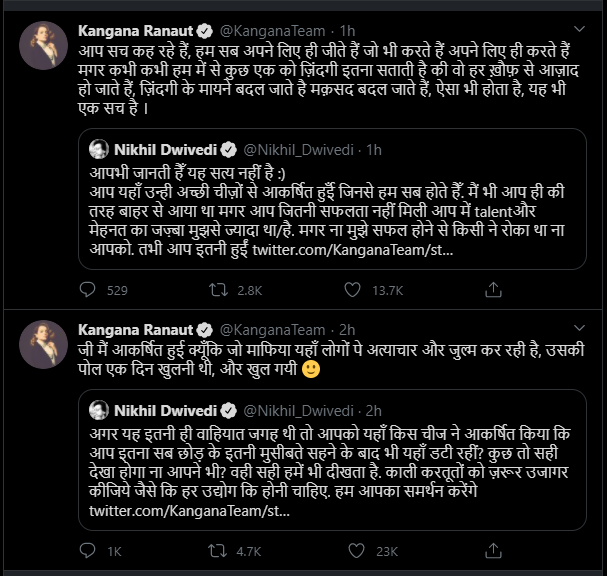 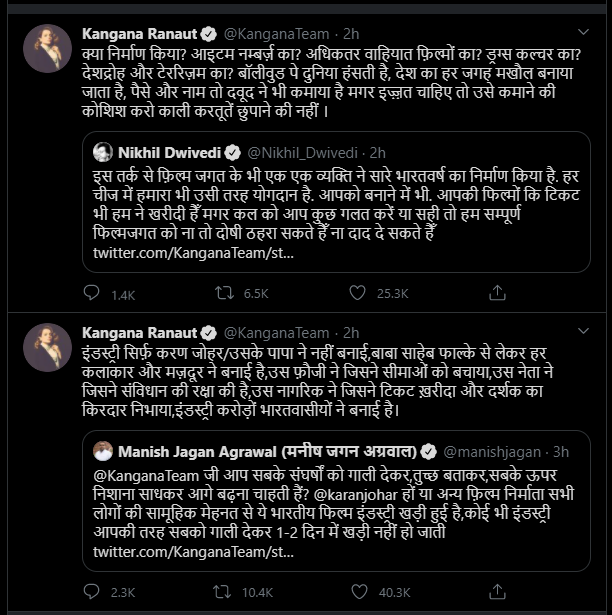