The #PaniPuri challenge has enticed not only commoners but celebs with Shilpa Shetty, Bharti Singh and many others actively taking the challenge.

TikTok has constantly been in the limelight for its weird and sometimes dangerous challenges. However, the new PaniPuri challenge has enticed not only commoners but also celebrities like actor Shilpa Shetty Kundra, Comedian Bharti Singh amongst others. The challenge involves people competing to have the maximum number of Indian snack.

Another interesting part of the challenge involves adding new flavours to the snack. Recently, actress Shilpa Shetty Kundra took to the social media platform and competed against husband Raj Kundra to devour a maximum number of pani puris. The video shows Shilpa winning the challenge.

Another person to try his hand at the challenge was celebrity chef Sanjeev Kapoor who posted a video in which he is seen introducing varied flavours of the snack. The video also shows Chef Kunal Kapur informing people about the different names of the snack before taking a bite into it. 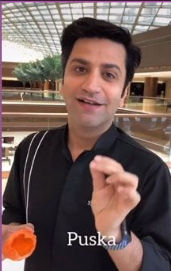 Stand up Comedian and TV personality Bharti Singh also posted a hilarious video in which she is seen taking a dig at people who cannot handle the spicy flavour of the snack.

Read: The Best Panipuri Eateries In The Country To Satisfy Your Soul