Recently, Priyanka Chopra Jonas, who enjoys a massive fan following on social media, shared a picture as she munched on some American Uncle Chips. Read more.

To keep the fans engaged during the lockdown period, Bollywood celebrities have been entertaining their fans with pictures of them 'quarantining' and have also indulged in some fun-filled interactive online sessions. Recently, Priyanka Chopra shared a picture, as she munched on some American Uncle chips. Read the details here.

Priyanka Chopra, who enjoys a massive fan following on social media platforms, took to her Instagram handle to share a picture of green spice-flavoured Uncle Chips. With the picture shared, Priyanka Chopra Jonas wrote: “Craving!! #UncleChips". Take a look at the picture: 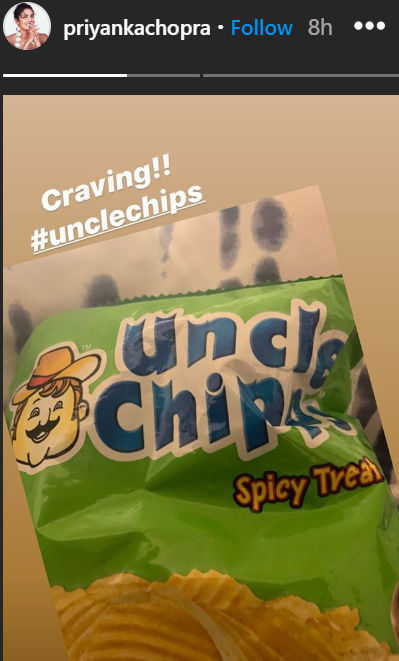 What's next for Priyanka Chopra Jonas?

Priyanka Chopra Jonas will be next seen along with Rajkummar Rao in the much-awaited Netflix original, The White Tiger. The actor will also be seen in a biopic of Sheela Anand, which follows the story of one of the leaders of the controversial Rajneesh movement during the 1980s. The actor has also been roped in for Matrix 4. It was recently announced that Priyanka Chopra Jonas will be seen opposite Richard Madden in the Amazon Prime Original, Citadel.

If the rumours are to be believed, Priyanka Chopra Jonas will be next seen in the biopic of the late astronaut, Kalpana Chawla. Even though no official statement has been issued by the actor or the makers, it would be exciting to witness Priyanka portray an astronaut.  Priyanka is all set to star in the upcoming Hollywood film, We Can Be Heroes. The project will mark Priyanka's fourth film in Hollywood as the main lead. The story of the films revolves around the life of a girl who discovers her super-powers. Directed by Robert Rodriguez, the movie also stars Pedro Pascal and Boyd Holbrook in prominent roles.

PEOPLE HAVE PLEDGED SO FAR
LATEST NEWS
View all
10 mins ago
Diljit dosanjh shows how to cook pasta in punjabi way in latest post; watch video
42 mins ago
Malaika arora, sonam kapoor and other bollywood celebs wish eid mubarak
1 hour ago
Ranveer singh’s collaboration with these directors will weave magic on celluloid
13 mins ago
List of films produced by akshay kumar in his career so far
4 mins ago
Ayushmann khurrana overwhelmed as 'article 15' to be remade in tamil