Alia Bhatt shared a cute selfie but what caught everyone's eye was the 'No 8' jersey framed on the wall in the background.

Alia Bhatt hosted 'What should I post a photo of' game on Instagram and shared some pictures for her fans. When she was asked to share the "22nd picture in her camera roll", Alia shared a cute selfie but what caught everyone's eye was the 'No 8' jersey framed on the wall in the background.

Ranbir's lucky number is 8 and has the number on his football jersey too. Ranbir Kapoor in many interviews has revealed his fixation with number 8. In an interaction for Sonam Kapoor's Zoya Factor, Ranbir said, "I don't know how it started as my mum's birthday is on July 8 but I just fell in love with the design of the number and the fact that it also can be infinity," he said in the video.

"So when I grew older, if I used to drive to shoots or if I had something that I was really nervous about and if I saw a white car, for example - if the number plate was 4040 or 2222, I used to add them up and if it added to number 8, I used to think I'm gonna kill it... It gave me confidence, psychological of course but it really worked for me," he added. 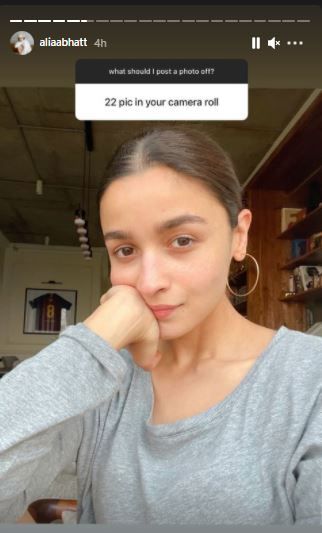 That Jersey man ðŸ˜ RK is a proper culé and now even Alia is? ðŸ˜‹ pic.twitter.com/GNxTfMwV9n

According to a report by Bollywood Hungama, Ranbir essays the role of Shiva, who can emit fire from his hand. While Alia plays his love interest, Isha in the film. Amitabh Bachchan portrays the role of Shiva’s guru. Mouni Roy stars in the film in a negative role along with Saurav Gurjar and is on a hunt for the most powerful weapon.