Ranveer Singh's Van Gogh portrait artist recently expressed his disappointment with the actor for not giving him credit for his artwork. Read on to know more.

Also Read: Ranveer Singh: Take A Look At The List Of Notable Awards And Nominations Since His Debut

However, artist Swapnil Pawar who created the original painting of Ranveer Singh in Vincent Van Gogh style is disappointed with the actor for not crediting him while sharing his artwork on his social media. Swapnil Pawar is a well-known artist hailing from Aurangabad who is well-known for curating the portraits of Bollywood celebs as some iconic personalities or characters. Swapnil Pawar recently spoke in an interview with a publication on Ranveer Singh not giving him credit for his artwork.

To this, the artist said that he was extremely overjoyed when Ranveer Singh went on to share his portrait on his social media. He was happy that his artwork reached the right person. But he was disappointed when he saw that Ranveer Singh did not mention his name as the credit but still he made peace with it.

The artist added that he waited for a while and started to roll out more artwork as positive campaigning for the Gully Boy actor. Swapnil said that he thought that Ranveer had maybe received a cropped version of his artwork and did not know that it was created by him. He then added that many of his followers also commented on Ranveer's post to give him credit but the actor paid no heed to them which disappointed him even more. He added that if he gave respect and thought highly of the Padmaavat actor, then even he should have given him his due credit. He added why cannot big artists like Ranveer Singh promote a small artist like him.

Later, Ranveer Singh edited his Instagram caption and mentioned the name of the artist. The caption now reads: "As we advance in life it becomes more and more difficult, but in fighting the difficulties the inmost strength of the heart is developed. Vincent Van Gogh @swapnilmpawar" 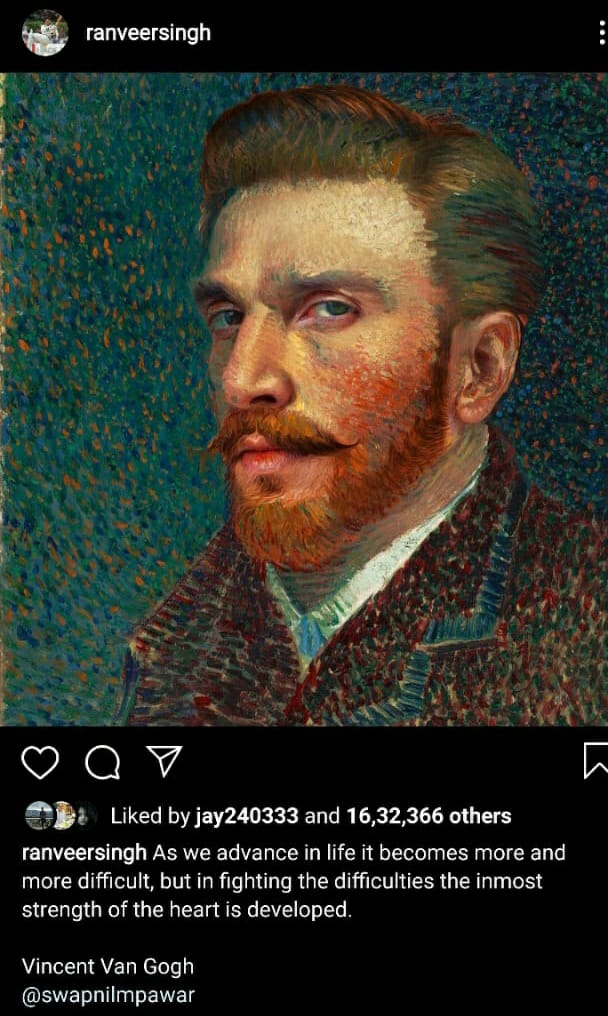 Talking about, Swapnil's works, the artist had earlier created a portrait of Madhuri Dixit in Mona Lisa's style. He also curated a portrait of ace cricketer MS Singh Dhoni in the style of the Game Of Thrones' character, The Night King. Earlier, Vicky Kaushal had also shared one of Swapnil's artworks of him as Charlie Chaplin wherein he had also gone on to credit the artist for his work.

PEOPLE HAVE PLEDGED SO FAR
LATEST NEWS
View all
11 hours ago
Unseen Pic of the Day: Baby Deepika is all smiles in her mother's arms
13 hours ago
Sanjay Dutt expresses love for mom Nargis in lovely tribute on her 91st birth anniversary
11 hours ago
'Man isn't a season, yet he changes': Anupam Kher ponders over the nature of change; Watch
10 hours ago
Huma Qureshi feels 'tops of the pops' with 108 Suryanamaskars, shares way to make money
9 hours ago
Unseen pic of the day: Sara Ali Khan is busy with her phone as Imtiaz Ali looks on