‘Tip Tip Barsa Paani’ gained popularity after Raveena Tandon and Akshay Kumar’s ‘Mohra’. Here’s what Netizens have to say about its remake in ‘Sooryavanshi’ 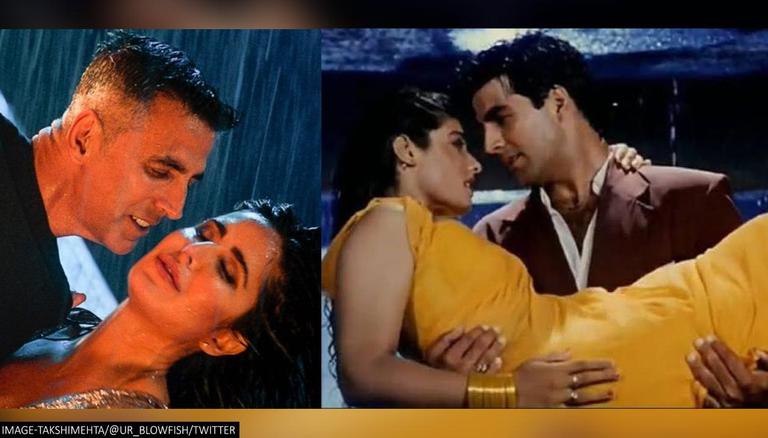 
The song Tip Tip Barsa Paani gained popularity in 1994 after the release of the action thriller, Mohra, starring Raveena Tandon and Akshay Kumar. The song has now been recreated with Akshay Kumar and his all-new co-star, Katrina Kaif in his latest film, Sooryavanshi. What both the songs have in common is the female actor dancing in the rain and Akshay Kumar. Netizens have now headed to Twitter to compare both the remake from Sooryavanshi, to the original hit number.

Some netizens believed that Kaif was no match to Raveena Tandon in the foot-tapping number. A Twitter user wrote, "No one can match the Level of #raveenatandon. Can't imagine this Song Without Raveena. Her Expression (fire emoticon)[sic]." An individual also mentioned that they were 'biased towards the 90's version' and mentioned that no one can match the aura and energy of Raveena. They mentioned that the original version was 'a class apart'. A fan mentioned that although they love Kaif, Tip Tip Barsa Paani would always mean Raveena Tandon for them. A netizen believed that the song did not need to be remade, as the original version of it had 'not aged at all'. They wrote, "Tip tip barsa paani just didn't need to be remade bc the original hadn’t aged AT ALL. But keeping it super close to the original and keeping Udit and Alka made it 1000% times better than other remixes[sic]."

RAVEENA TANDON IN TIP TIP BARSA PANI >>>>>>>
SORRY BUT I'M BIASED TOWARD THE 90'S VERSION
No one can match her level, her energy's & her aura. She was soo graceful & beautiful in that yellow saree. That version was class apart 🥵🔥#raveenatandon #TipTipBarsaPani #Sooryavanshi

Tip tip barsa paani just didnt need to be remade bc the original hadn’t aged AT ALL.

But keeping it super close to the original and keeping Udit and Alka made it 1000% times better than other remixes.#TipTipBarsaPaani #TipTip

Although several netizens rooted for the original song, there were also some who preferred Katrina Kaif's remake. A netizen mentioned on Twitter that they were not huge fans of Bollywood remaking songs, but made an exception for this one. A fan mentioned they had 'happy tears' seeing the song be recreated after all these years. Another netizen also mentioned that between the two, Kaif definitely 'stole the show' with her performance as they wrote, "Sorry Raveena But Katrina Stole the Show in Tip Tip Barsa Paani[sic]." A fan also mentioned that Katrina Kaif in the remake is 'superior stuff' and also commended other aspects of the song. They wrote, "Katrina Kaif is Tip Tip Barsa Paani is superior stuff! The remix has been done well and they even retained the original vocal artists[sic]."

Okay! I'm not a big fan of bollywood remaking old songs and ruining it but Katrina Kaif in Tip Tip Barsa Paani is just😍🥵🔥 pic.twitter.com/MtDAIFzK4k

Katrina Kaif is Tip Tip Barsa Paani is superior stuff! 🔥🔥🔥
The remix has been done well and they even retained the original vocal artists. 👏 #Sooryavanshi #TipTipBarsaPaani