As Akshay Kumar celebrates his 53rd birthday today (on September 9), his Housefull co-star, Riteish Deshmukh took to his Instagram handle to wish the actor by sharing a series of unmissable throwback pictures with him. The pictures feature Riteish Deshmukh and Akshay Kumar's several priceless moments together. Take a look at the pictures shared:

My Brother, My Friend, My Co-Actor - I love you Sundi - I wish you only the best - @akshaykumar #HappyBirthdayAkshayKumar

With the picture shared, Riteish Deshmukh also penned a heartwarming caption for his 'brother', which reads: ‘My Brother, My Friend, My Co-Actor - I love you Sundi - I wish you only the best’.

Soon after the picture was shared, fans rushed to the comment section and wished Akshay Kumar on his 53rd birthday. Some fans also lauded Akshay Kumar and Riteish Deshmukh’s look in the pictures shared. Take a look at how fans reacted: 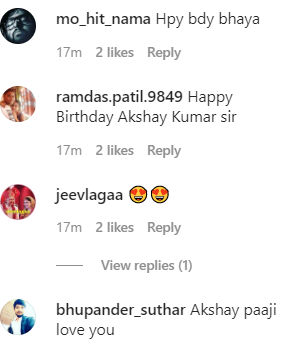 Akshay Kumar is currently gearing up for the release of his next, Bachchan Pandey, which is the remake of the South Indian hit film Veeram. The story of the film revolves around the life of a villager who battles his fiancée’s father to protect his family. Helmed by Farhad Samji, the movie promises to deliver Akshay Kumar in a never-seen-before avatar, making the film watch-worthy.

Reportedly, the movie also stars Kriti Sanon in the leading role. Akshay will be next seen in the upcoming sequel Sooryavanshi along with Katrina Kaif. Directed by Rohit Shetty, the film follows the adventures of an Indian policeman. Akshay Kumar will also be seen sharing screen space with Kiara Advani in the upcoming film Laxmmi Bomb.

Directed by Farhad Samji, the movie is all set for a Christmas 2020 release. Produced by Sajid Nadiadwala under the banner of Nadiadwala Grandson Entertainment, the movie also stars Virendra Saxena and Varsha Bollamma in prominent roles. The actor will be also seen in Bell Bottom along with Vaani Kapoor, Lara Dutta and Huma Qureshi.