Shahid Kapoor Hosts A Q&A With Fans, Reveals He Wants To Do More Films Like 'Kabir Singh'

Shahid Kapoor recently held a quarantine time Q&A session with his fans. When asked about 'Kabir Singh', he revealed that he wants to do more films like it.

One of the highest-grossing films of the year 2019 was was the Hindi blockbuster Kabir Singh. Starring Shahid Kapoor and Kiara Advani, the film turned out to be one of Shahid's most intense performances. Directed by Sandeep Reddy Vanga, Kabir Singh was the official remake of a popular Telugu film titled Arjun Reddy. Fans loved watching the actor in the role and have been wondering if there will be a sequel or another film like that ever since.

Shahid Kapoor is keen to do more films like Kabir Singh?

Now spending his time indoors due to the Coronavirus pandemic, Shahid Kapoor often posts pictures and videos on his social media stories to keep his fans updated about his life during the self-quarantine period. The actor has recently hosted an online Q&A session on his social media for his fans. While fans asked all kinds of questions, one of them said "Sir we want more movies like Kabir Singh". Kapoor wittily responded with, "Me too. Where to find?" 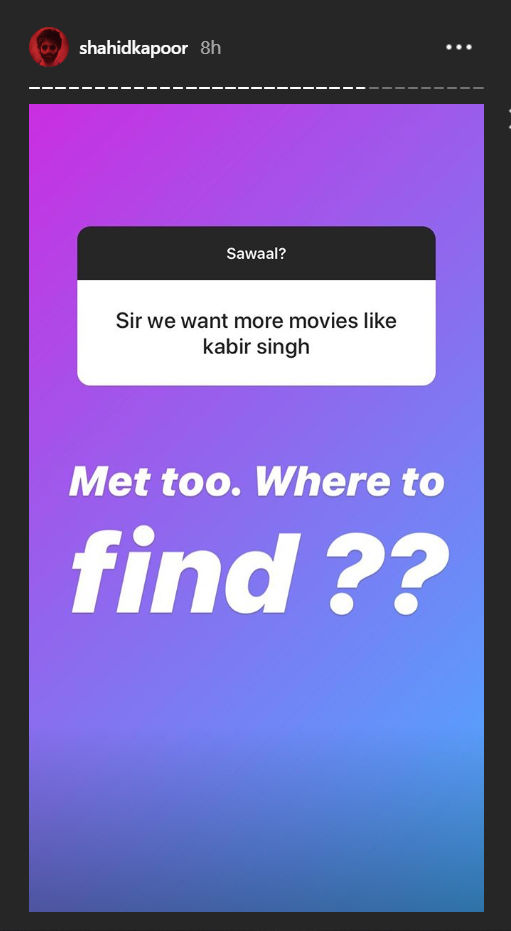 The film met with harsh criticism for the lead actor's behaviour. Kabir Singh was said to be a film that glamorised misogyny and toxic masculinity. It created a huge stir on social media with different reactions from the fans. However, the film managed to beat Avengers, Joker, and Gully Boy to become the most searched film in India. Talking about the film as a whole, Shahid Kapoor said that one of the biggest things that the film did was to start a conversation and make society reflect upon itself.

During this candid Q&A, Shahid Kapoor also took a lot of questions about his upcoming film, Jersey. He also shared antidotes and how to make the quarantine time more productive. He also talked about his admiration for his fellow co-stars and his married life with Mira Kapoor.