Makers of the romantic drama 'Shiddat' have released its new poster, showcasing Diana Penty and Mohit Raina's magical duo. The film will premiere on October 1. 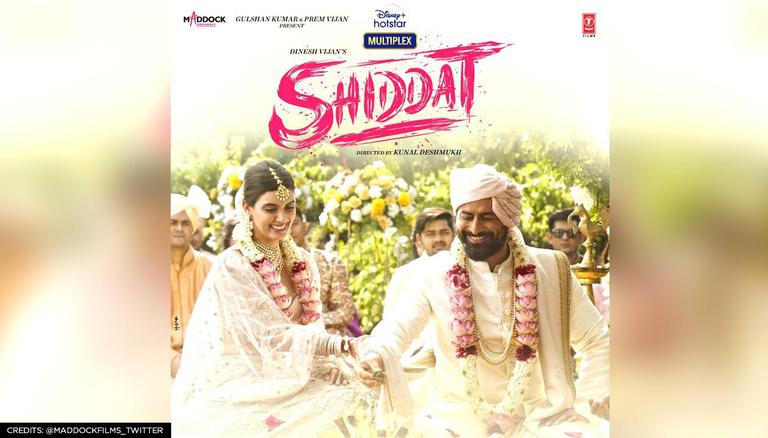 
Fans are excited to witness the ensemble cast of Shiddat, including  Radhika Madan, Sunny Kaushal, Diana Penty and Mohit Raina create magic on screen. The Kunal Deshmukh directorial is touted to be a romance drama, with Radhika Madan and Sunny Kaushal's smouldering chemistry as Kartika and Jaggi respectively taking fans by storm. Now, the makers have released a new poster of the Disney+ Hotstar film, focusing on Diana Penty and Mohit's characters as they look like a match made in heaven.

The duo's characters Gautam and Ira are all smiles as they engage in their wedding nuptials, looking gorgeous in their matching attire. The film was originally slated to premiere in September 2020, however, owing to the COVID-19 pandemic, it will now be premiering on October 1, 2021 on Disney+ Hotstar.

Taking to their social media handles on Tuesday, September 21, the makers and cast unveiled the film's new poster ahead of its release and wrote," Gautam and Ira making everything around us so magical and full of Shiddat! #Shiddat releasing on 1st October on @DisneyPlusHS". Take a look.

Gautam and Ira making everything around us so magical and full of Shiddat! #Shiddat releasing on 1st October on @DisneyPlusHS #DisneyPlusHotstarMultiplex https://t.co/hiWLZhnNjf pic.twitter.com/tQ9NmSJ5Oq

The movie's trailer was also released earlier this month and showcased the passion and love of the leading duo, Radhika and Sunny, in their first-time collaboration. Tilted Shiddat Wala Pyaar, the two-minute clip was high on romance, drama, and shows Jaggi falling head over heels in love with Kartika. Announcing the trailer drop scheduled on September 13, Sunny Kaushal wrote, ''Watch Kartika & Jaggi take over the world with their Shiddat wala pyaar.''

While the duo has been creating buzz, the film's latest track Akhiyan Udeek Diyan has added to the audience's anticipation. The track is a rendition of Nusrat Fateh Ali Khan's qawwali song and features Sunny, Radhika, Mohit Raina and Diana Penty showcasing the trials and tribulations one goes through to reach out to their loved one.

The film is helmed by Kunal Deshmukh and produced by Bhushan Kumar and Dinesh Vijan under the banners T-Series and Maddock Films respectively. Sachin–Jigar and Pritam are responsible for providing music to the film while Sridhar Raghavan and Dheeraj Rattan have written the screenplay. Apart from the ensemble cast, the film also stars Sikander Kher