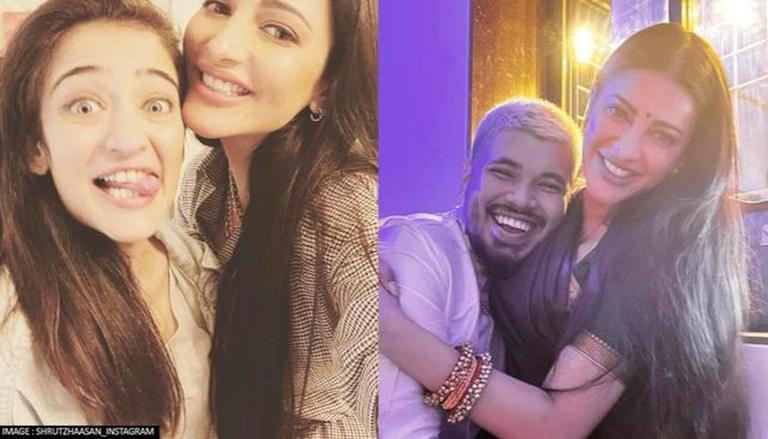 
Shruti Haasan is known for sharing glimpses of her life with her family, close friends and relatives on her Instagram account. She took to the social media platform on Friday and shared a few goofy black and white pictures, which featured her sister, Akshara Haasan and boyfriend, Santanu Hazarika. In the caption of the picture, she called them her favourite humans.

Shruti Haasan seems to have had a great day as she posted some cute pictures with her sister and boyfriend. The trio was seen pouting, looking confused, grinning and showing their tongue to the camera as they appeared to be lying down when the pictures were clicked. The caption read, "Just my fav humans 🖤💕".

Shruti Haasan recently opened up about her relationship, which she kept away from the limelight for a long time. In an interview with Pinkvilla, the Luck actor mentioned that she was not trying to hide aspects from her personal life, but is blessed to be able to lead a private life. Haasan mentioned that any time she brings up her relationship, the first question she is asked is about marriage and if her father, Kamal Haasan and her boyfriend get along. She stated that these things stopped her from speaking about her beau sooner. She also spoke about her life with her Santanu Hazarika, who is an artist and mentioned that they go through life like any other couple. She recently posted a picture with him from Diwali and wrote, "An imperfect picture from our perfect Diwali ✨💫 wishing you and yours the best the brightest and all the blessings!"

Shruti Haasan also often shares pictures with her sister, Akshara and did so most recently on her birthday. The duo could be seen making goofy faces for the camera and Shruti wrote, "Happy birthday @aksharaa.haasan… you are ☀️ you are 💎 and you are my darling ❤️ I’m so excited for all that you have in store for us and I’m so glad I get to be your Akka 🌸"

She also posted a picture of the first time the duo met after the lockdowns that were imposed in various parts of the country. She mentioned that they had not met for a very long time and also penned down the importance of having a sister. The caption read, "When you have a sister you don’t need much else 😚😁❤️ little known fact we didn’t meet through the entire pandemic until now because of our schedules - this trip was so special to both of us. 🖤"