Sonakshi Sinha Recites Poem For Farmers, Says 'tribute To The Hands That Feed Us'

Amid the ongoing farmer's protest, actress Sonakshi Sinha came out in support of it with a heartfelt poem. The actress took to Instagram and recited a poem.

Amid the ongoing farmer's protest, actress Sonakshi Sinha came out in support for the farmers with a heartfelt poem. The actress took to Instagram and recited a poem, narrating the difficulties faced by them during the protests. She lent her voice to a poem that attempts to explain the reason farmers had to leave their homes to protest on the streets. The video also showed a montage of farmers getting on the streets to express their concerns across the people.

She captioned the post and wrote, “Nazarein milake, khud se poocho - kyun? A tribute to the hands that feed us... a beautiful poem written by @varadbhatnagar. Shot and conceptualized by @gursanjam.s.puri and narrated by me. #farmersprotest.” In the poem, the actress said, “Why? Everybody asks this question. Why have we got down on the roads?  Leaving behind the fields, villages, why have we stepped into the cities? These hands that once used to plow the fields, carry the sacks and what now, why have they been now divulging in politics?”  The heart touching tribute of the actress for the farmers received immense love and appreciation from the people in the comment section. One of the users wrote, “thank you maam for supporting us.” Another user wrote, “Well done Sonakshi maam.” A third user chimed in and wrote, “You have literally won the hearts of all your fans today maam.” Another user echoed similar sentiments and wrote, “You are my favourite actress. I will make sure to watch all your movies now.”

Read: Sonakshi Sinha Shows How She Waits When Her 'order Has Shipped' | Watch

Read: Sonakshi Sinha Looks Ravishing In Her Latest Post, Check It Out Here 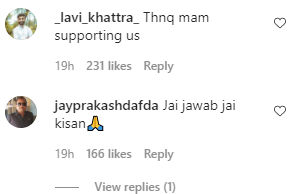 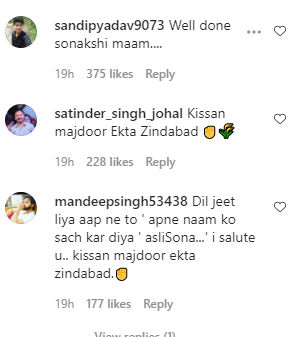 Sonakshi’s tribute came after thousands of farmers have been protesting at Delhi’s borders with Haryana and Uttar Pradesh over the removal of farm laws. However, the government has maintained that the new laws will bring better opportunities to farmers and introduce new technologies in agriculture. As the farmers' entered New Delhi during their tractor march on January 26, tear gas shells were fired near the Sanjay Gandhi Transport Nagar, and the farmers were seen heckling the police personnel near ITO. Visuals also show that farmers are carrying sticks, despite the Delhi Police circular stating it clearly that they are not allowed to carry any weapon. They proceeded to storm the Red Fort and plant a flag there that wasn't the Tricolour.

Read: Sonakshi Sinha Has A Cheeky Response To Gulshan’s Comment On Whether She Is 'spying'