Sonam Kapoor, who was named PETA India’s Person of the Year for 2018, took to her Twitter handle to reveal why Anand Ahuja didn't have a baraat at their wedding

Sonam Kapoor's wedding in May 2018 with Anand Ahuja was one of the beautiful ceremonies in Bollywood. The couple tied the knot in a traditional Sikh wedding in presence of their family and friends in Mumbai. The big, fat and intimate Punjabi wedding was a memorable affair in the industry.

While the popular saying goes 'My prince charming will come on a white horse' and so does the Indian rituals where the groom arrives with the baraat on a horse, Sonam Kapoor revealed why Anand Ahuja didn't have a baraat at their wedding. Sonam shared a video of PETA India where they show how weddings are 'no fun for horses'.

Spreading the message of 'don't rent animals for any event', Sonam Kapoor revealed that 'the cruelty shown towards horses at such events' is the precise reason why her husband Anand Ahuja didn't opt for a baraat. Watch the video below —

My husband didn’t have a baraat with horses or loud music. For this exact reason. https://t.co/PheHqGGyMf

Tagging a series of celebrities like Virat Kohli, Deepika Padukone, Abhishek Bachchan, Jacqueline Fernandez, Alia Bhatt, Kartik Aaryan, Vicky Kaushal, Tiger Shroff and many more, PETA India spread the message across to celebrities from different walks of life. Richa Chadha who was also tagged by the organisation, replied to the video saying, 'there will be no horsing around' at her wedding with Ali Fazal (whenever that happens). 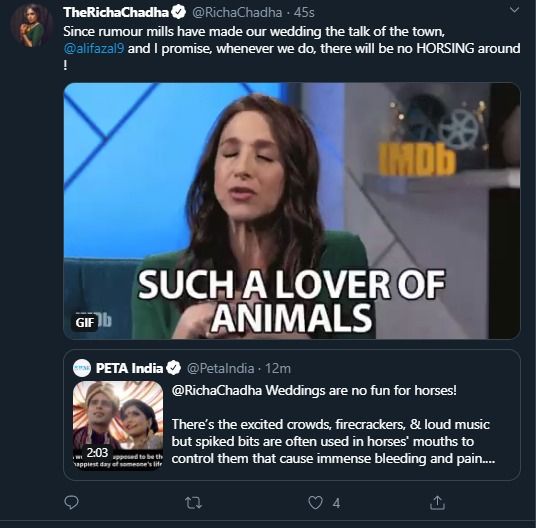 For singing the praises of vegan eating, keeping animal skins out of her handbag line for Rheson, and taking many other actions for animals, actor Sonam Kapoor was named PETA India’s Person of the Year for 2018.

Sonam has always been vocal about issues relating to animals. Her past animal advocacy efforts include urging the Minister of Environment, Forest and Climate Change not to revoke the ban on classroom dissection for life science and zoology students at universities; calling for a state-wide ban in Maharashtra on glass-coated manja, which can entangle and kill birds and more.

On the professional front, Sonam was last seen opposite Dulquer Salman in 'Zoya Factor'.

PEOPLE HAVE PLEDGED SO FAR
Here's an interesting trivia about superstar Anil Kapoor that every fan must know about
Tiger Shroff asks fans for suggestions on his new beard look during the lockdown
Ajay Devgn B'day:Biggest hits of the actor, from 'Singham' to 'Tanhaji-The Unsung Warrior'
Malaika Arora on her separation from Arbaaz: “Everyone was against it initially”
Shraddha Kapoor vs Kiara Advani who slayed the golden shimmery outfit better?
DO NOT MISS
UNITE AND FIGHT CORONA: PM MODI
AIR INDIA SIGNS CONTRACT
MAHARASHTRA COVID-19 TALLY
24-HOUR CURFEW IN MECCA & MEDINA
'9000 MARKAZ CONTACTS TRACED'
FANS EXCITED FOR KOHLI-KP TALK