Young Sonam, Arjun & Kapoor Cousins Pose In Style In Siblings Day Post, Can You Spot All?

A young Sonam Kapoor, Arjun Kapoor and other Kapoor cousins posed in style in a throwback picture from Siblings Day, celebrated across the world on Friday.

The Kapoors are among the most recognised families in the film industry. Not just the lineage of Prithviraj Kapoor and Raj Kapoor, even the one led by Anil Kapoor and Boney Kapoor is popular, with numerous members of the family joining the world of films. Apart from their venture into films, the Kapoors are also known for their strong bond between each other and regular gatherings.

One got a glimpse of this recently with some throwback pictures of Sonam K Ahuja, Rhea Kapoor, Arjun Kapoor, Harsh Varrdhan Kapoor and Mohit Marwah much before they entered showbiz. The occasion was World Siblings Day and Rhea Kapoor shared the snaps on her Instagram stories.

In the first one, one can see Sonam and Rhea Kapoor standing to the sides of their uncle, actor Sanjay Kapoor and mother Sunita Kapoor. The duo’s aunt Reena Kapoor and her husband Sandeep Marwah can also be seen in the photograph. The interesting bit about the photograph was the caption, with Rhea quipping that it needed a wider angle, with a young Arjun standing towards one side.

In the other one, clicked in London, Sunita has Sonam and a young Harsh Varrdhan near her, while Akshay and Mohit Marwah and Arjun Kapoor have a fun moment together, while Rhea stands out from the rest.

Here are the pictures 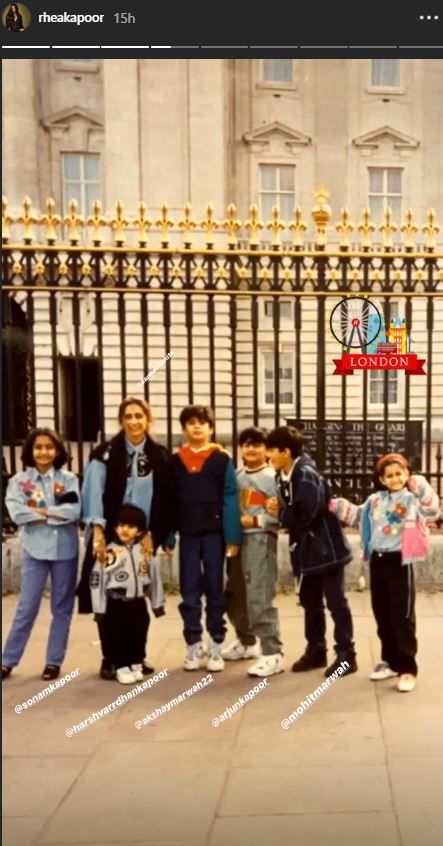 The notable part from the picture are Boney Kapoor's daughters Anshula Kapoor, Janhvi and Khushi Kapoor and Sanjay Kapoor’s children Shanaya and Jahaan Kapoor. They are much younger than this group and might have been very young at that time or maybe not have born at this time.

READ:Arjun Kapoor And Kriti Sanon's Adorable Pics Together Are All Things Fun

Meanwhile, the family’s pictures are known to go viral regularly, like one witnessed at Mohit Marwah’s wedding. Be it Raksha Bandhan or Diwali, the family is known to celebrate the festivals together.

I have specifically chosen this one because I look the best in this one !!! pic.twitter.com/OmkwwwoLRe