After May 2019, Suchitra Krishnamoorthi has once again renewed her feud with director Anurag Kashyap for attacking Prime Minister Narendra Modi on Twitter

After May 2019, Suchitra Krishnamoorthi has once again renewed her feud with director Anurag Kashyap for attacking Prime Minister Narendra Modi on Twitter. However, the singer-actress deleted the tweet later. While explaining 'nepotism' to a netizen, Suchitra took a sharp dig at Kashyap and said that 'if a person's confidence is so low that he does nothing but insult others rather than working on their own success, how will he succeed?'

(First do you work properly and not make mediocre work like Sacred Games and Ghost Stories. Because you can't digest failure that is why you are busy insulting PM Modi.)

Ma’am you don’t bother about delusional idiots like Anurag Kashyap. You shouldn’t have deleted the tweet. You are a lioness. The whole nation resonates with your thought process except the Tukde Tukde gang 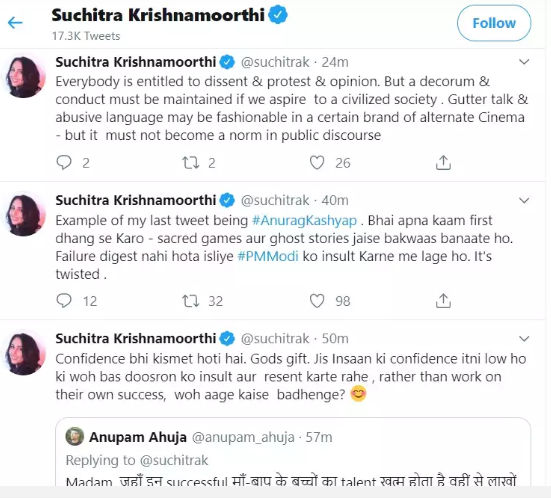 Everybody is entitled to dissent & protest & opinion. But a decorum & conduct must be maintained if we aspire to a civilized society . Gutter talk & abusive language may be fashionable in a certain brand of alternate Cinema - but it must not become a norm in public discourse

Renuka Shahane calls out Suchitra Krishnamoorthi for mentioning 'sex workers' and 'criminals' in 'one bracket', the two resolve it amicably on Twitter

In a Twitter feud that goes back some time, in May 2019, Kashyap had took to his Twitter and tagged the Prime Minister in a tweet to raise concern about shocking horrific threats that had been made out to his family. In doing so, however, he referred to the threat-makers as being 'your followers', with "Dear Narendra Modi sir. Congratulations on your victory and thank you for the message of inclusiveness. Sir please also tell us how do we deal with these followers of yours who celebrate your victory by threatening my daughter with messages like this for being your dissenter."

To this, Suchitra wrote: "Dear Anurag Kashyap, I have been openly pro-Modi and yet have often received rape threats for my daughter and even myself when controversy has erupted. I have done what a right thinking citizen must do... complained to Mumbai Police and Cyber Crime cell. Not Tag PM. What's your point." And Kashyap responded by saying, "Point is - one statement from him that he does not endorse hatemongers will shut them up."