Amid coronavirus pandemic which has caused a great impact on the people, news of army personnel’s dying in Handwara has shaken the entire country. In one of the deadliest operations for the security forces in the Valley, an Indian army colonel, a major and two soldiers, along with a Jammu and Kashmir Police sub-inspector, were killed in a counter-terrorist operation in Kashmir on May 2. Bollywood star Vicky Kaushal paid tribute to the martyrs for their sacrifices.

Vicky Kaushal who donned the military uniform in Uri: The Surgical Strike and now for his upcoming film based on Field Marshal Sam Manekshaw, shared a picture on Instagram story. In the picture, the Masaan actor paid tribute to the soldiers who lost their lives in the operation. The actor mentioned the names of the army personnel who sacrificed their lives including, “Colonel Ashutosh Sharma, Major Anuj Sood, Naik Rajesh, Lance Naik Dinesh, and Sub-Inspector Shakeel Qazi.” Apart from this, the actor paid homage to the soldiers and wrote, “I bow to the supreme sacrifice of our brave hearts in Handwara.”

Read: Vicky Kaushal's "Hows The Josh" & Other Catchphrases Made Popular By B-town Actors

Read: Sona Mohapatra's Goofy Pictures With Vicky Kaushal Give Glimpse Of Their Bond; Check Out 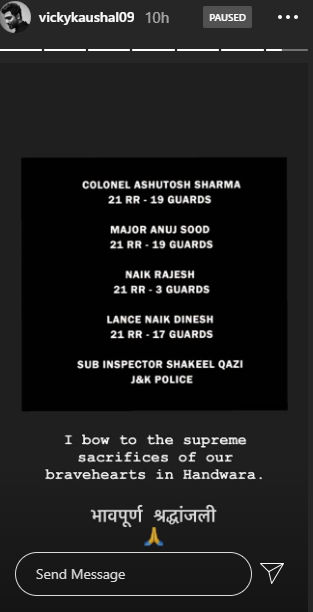 The 12-hour operation, which took place at Handwara in Kupwara district, also resulted in the killing of two terrorists, the Indian Army reportedly said in a statement. According to reports by a media outlet, Vijay Kumar, inspector general of police, Jammu and Kashmir, reportedly said that a top Lashkar-e Taiba terrorist, identified as Haider, a Pakistani national, was killed in the operation.

Meanwhile, Vicky who was last seen in Bhooth: The Haunted Ship, is prepping for his magnum opus and period drama film Takht. He will also be seen in an untitled Meghna Gulzar's directorial film, where he will be playing the role of Field Marshal Sam Manekshaw. Apart from these two, Vicky will also be seen playing the role of Sardar Udham Singh in Shoojit Sircar directorial film.

PEOPLE HAVE PLEDGED SO FAR
LATEST NEWS
View all
1 hour ago
Kiara advani's punjabi songs that you must add to your playlist
53 mins ago
Kareena kapoor khan or jennifer lopez: who aced the silver mirror work outfit like a diva?
1 hour ago
Throwback to salman khan's famous love song 'dil diyan gallan' from 'tiger zinda hai'
33 mins ago
Inaaya naumi kemmu wishes kunal kemmu, writes "best papa ever hands down"
1 hour ago
List of films produced by akshay kumar in his career so far