Wendell Rodricks Breathes His Last, Tributes Pour In From All Quarters

Wendell Rodricks' passed away at the age of 59. Condolences poured in from politicians as well as people of fashion and showbiz world.

One of the most celebrated fashion designers of India Wendell Rodricks passed away at the age of 59. He took his last breath in his home in Colvale, Goa. Condolences started pouring in from politicians as well as people of fashion and showbiz world. The reason for his death is reported to be a heart attack. Apart from being a renowned designer, Rodricks was also an activist who stood for various causes including the rights of the LGBTQIA+ community. He was also felicitated with a Padma Shri award, the fourth-highest civilian award of the Government of India.

The Fashion Design Council of India broke the news of his demise on their official Twitter handle. As soon as the news broke, celebrities, politicians, and other public figures took to social media to express their heartfelt condolences to the designer’s family and dear ones. Everyone from Neeta Lulla to Smriti Irani took to their official social media handles to condole his sudden death.

A shocked Sona Mohapatra tweets: "No, trying to call you. Pick up"

Full of love. Full of life. All heart. All soul. A connoisseur. A creator. A pioneer. A change-maker. I feel lucky having known you. @Wendellrodricks you will remain in my heart forever. Refuse to see you any other way than that afternoon we spent in your glorious home in Goa. pic.twitter.com/06959BjXeD

Shocked to hear about the untimely demise of Wendell Rodricks, one of India’s most renowned designers. My heartfelt condolences to his loved ones. May his soul rest in peace 🙏

Wendell's contemporary Neeta Lulla says he "will be missed"

Saddened to hear about the sad demise of @Wendellrodricks you were a dear friend and a designer Par Excellence .
You will be missed . RIP🙏

Shocked to hear about the sudden demise of fashion designer, Wendell Rodricks,
My heartfelt condolences to his family & dear ones. We will truly miss him. RIP 🙏 pic.twitter.com/1aEAbMzyMS

Shocked at the passing of designer extraordinaire @Wendellrodricks

A pioneer and a genuine original, a master of the simple flowing silhouette, Wendell stood apart from his peers with his unique vision

Will be sorely missed 🙏🏽 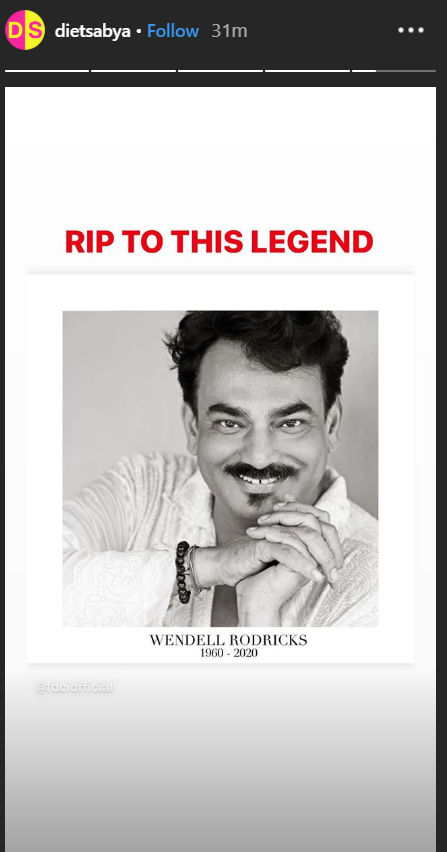