Actor Rishi Kapoor remembers Kobe Bryant as he shares a beautiful throwback picture of his son Ranbir Kapoor with the legend from 2010. See pictures here.

The tragic and untimely demise of NBA star Kobe Bryant has shocked his fans in the film industry with superstars Akshay Kumar, Arjun Kapoor, Akshay Kumar, and Ranveer Singh remembering the basketball legend as a constant inspiration.

Bryant, 41, died in a helicopter crash on Sunday in suburban Los Angeles that also claimed the life of his 13-year-old daughter Gianna and seven others.

Remembering the legend, veteran actor Rishi Kapoor took to his Twitter handle to share a picture of his son Ranbir meeting Kobe Bryant in 2010 when he was shooting in New York. The actor met the basketball player at a Lakers vs Knicks game. An NBA enthusiast, Ranbir Kapoor later also got a pair of Kobe's giant sneakers and a jersey as a gift.

Checked with Ranbir.Being an ardent fan of the game and Kobe himself, he was specially taken to watch a game Lakers v/s New York Nicks at the Madison Sq. Gardens,NY. After the game he gave his shoes and autographed it to Ranbir. This is during “Anjana Anjani”shoot in NY. https://t.co/o5qrbmEi4D

Ranbir with the legend the late Kobe Bryant. pic.twitter.com/Y7J9CfIKgd

Ranbir is not the only one who has met Kobe in the past. Bollywood actor Dino Morea and Lara Dutta too met the legend. Actor and former Miss Universe Lara Dutta shared a throwback picture with Bryant and wrote, "Heartbreaking to wake up to news like this. He had no clue who this basketball-loving Bollywood actress was, but he was warm, he was funny and he was inclusive."

RIP #Kobe #legend #gianna This is so very sad. God bless their souls. 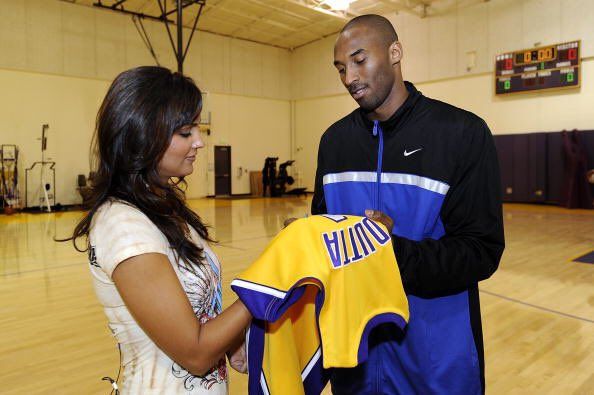 Actor Abhishek Bachchan said he was heartbroken. "He was such an inspiration. Thoughts and prayers to his family and especially with his daughter Gianna," he tweeted.

Actor-filmmaker Farhan Akhtar said, "What a tragedy. #KobeBryant. #GiannaBryant RIP Deepest condolences to his family and wish them strength at this time of unimaginable grief."

Actor Madhuri Dixit said she was devastated with the news.

"This is just so heartbreaking. The untimely death of #KobeBryant and his daughter is so devastating. He was one of the best basketball players who inspired millions of people. My deepest condolences to all the grieving families," she said.