Guillermo del Toro helmed the original Hellboy film and its sequel. The filmmaker said that what allowed them to be made does not exist now. Read to know more

Guillermo del Toro bought the superhero, Hellboy to the big screens as he directed the original films about the character. It was Hellboy in 2004 and Hellboy II: The Golden Army in 2008. The movie stars Ron Perlman as Hellboy. A reboot movie was made which failed at the box office. In an interview with a media portal. Guillermo del Toro said that what allowed ‘Hellboy’ films to be made no longer exists. Read to know more.

Currently, superhero films are on a rise and audiences love to see them. An online portal wrote that Guillermo del Toro’s Hellboy missed the boom of superhero films and it was ahead of its time. Replying to it on Twitter, the Oscar-winning filmmaker shared his feeling with multiple tweets. In them, he mentioned that the thing that allowed the films to take place does not exist now. He revealed a few more facts. Take a look at his tweets. 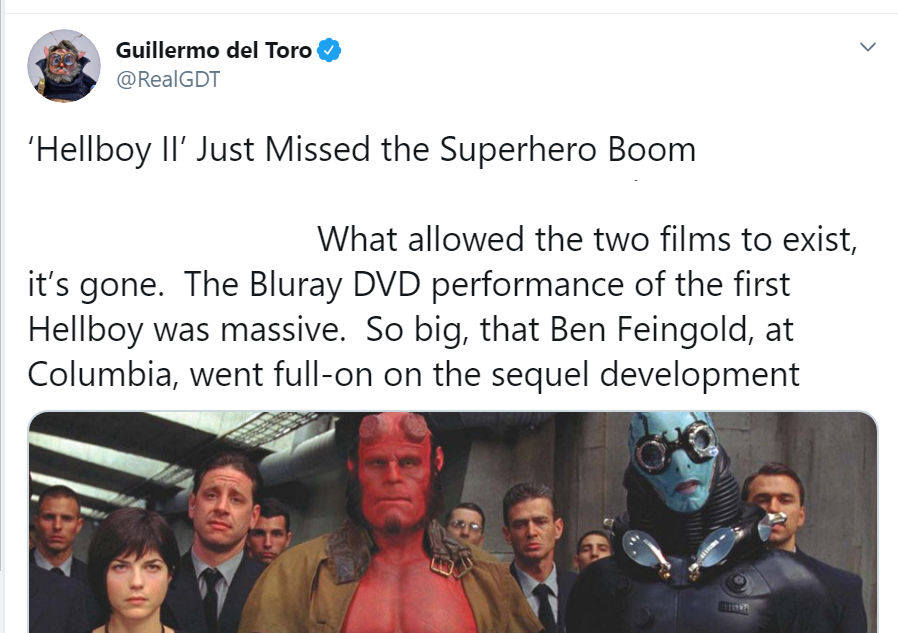 Ben was so impressed by those numbers that he made Hellboy one of the very first blurays from Columbia Pictures. Far as I can recall, the number for home video surpassed theatrical.

The movie is one my top five I have directed.

The first HELLBOY movie was developed BEFORE even X-MEN was on film. I remember visiting MYSTERY MEN's set to try to convince Universal to green light it. It languished for a long time. To my mind, the first BLADE was instrumental in showing how superhero movies could exist--

--at the end of the 20th century. There was a collision of DARK CITY and BLADE that somehow, in subtle ways paved the way, via Anime, for MATRIX to explode into the world.

But, still, back then it was a countermovement to try and do superhero films, specially with material that didn't have Marvel numbers. For many years, to me, the proto-comic book movie was Verhoeven's ROBOCOP in so many ways.

CONCRETE was, I also thought, ripe to be adapted ( Fran Walsh and Peter Jackson did a screenplay for it).

Guillermo del Toro’s Hellboy films received appreciation from the audiences and was a success at the box office. However, the reboot film, Hellboy (2019) starring David Harbour in the titular role, earned mostly negative reviews with criticism pointing at the tone, plot and unfavourable comparisons with del Toro’s version. The film tanked at the box office as it reportedly collected around $44 million worldwide against a $50 million production budget.

PEOPLE HAVE PLEDGED SO FAR
LATEST NEWS
View all
19 hours ago
Hasan Minhaj's anti-racism video praised online, netizens call it 'most powerful message'
20 hours ago
Matt Damon & family travel back to California after being stranded in Ireland for 2 months
17 hours ago
Ben Affleck's private Instagram account with only three followers leaked on Twitter
16 hours ago
When Miley Cyrus slayed in designer ensembles by Ralph Lauren & more; See pics
16 hours ago
Check Nick Jonas' 'Happiness Begins' creative edits made by his fans