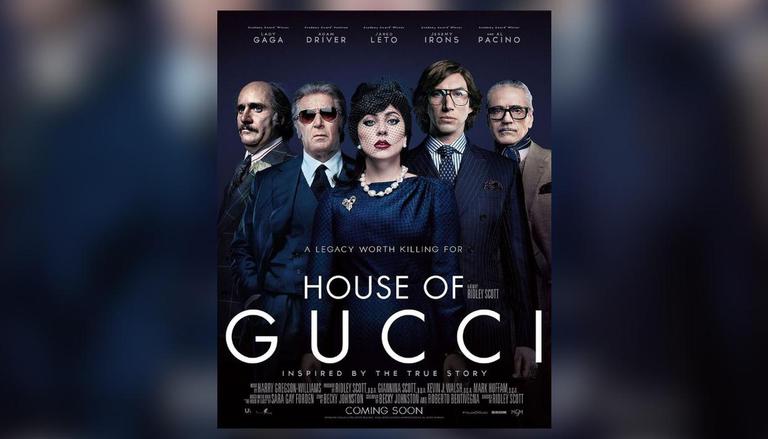 
Lady Gaga starrer House Of Gucci is one of the much-awaited films of 2021. The film, which is set for this year's thanksgiving, narrates the story of the assassination of Maurizio Gucci orchestrated by his ex-wife, Patrizia. The makers of the film recently unveiled the official poster of the upcoming fashion crime drama.

Taking to social media, the House Of Gucci makers released the first official poster of the film. The poster sees Lady Gaga standing in front of Adam Driver, Al Pacino, Jeremy Irons and Jared Leto. The poster also introduces all five main actors of the film. Lady Gaga plays the role of Patrizia Reggiani, while Adam Driver portrays her ex-husband Maurizio Gucci. The film also has unrecognizable Jared Leto playing Paolo Gucci, Al Pacino as Aldo Gucci and Jeremy Irons in the role of Rodolfo Gucci. Sharing the poster, the official social media handle of the film wrote, "This Thanksgiving, Join The Family." Fans reacted to the post and revealed they could not wait for the film. A user commented, "Can't wait to see this movie."  Adam Driver fans cheered for him and wrote, "ADAM DRIVER, THE NEXT OSCAR IS FOR YOU!"

Details about House Of Gucci

The upcoming crime drama House Of Gucci is based on the book the House Of Gucci: A Sensational Story Of Murder, Madness, Glamour And Greed by Sara Gay Forden. Roberto Bentivegna has given the script of the film while Ridley Scott has helmed the project. The film also cast Salma Hayek as Pina Auriemma and Jack Huston as Domenico De Sole. The filmmakers dropped the official trailer of the film about two months ago. The trailer gave a glimpse of the Academy Award-winner Lady Gaga playing Patrizia Reggiani. It unveiled how the socialite's life was filled with glamour, power and scandals. In the beginning, Gaga as Patrizia said, "It was a name that sounded so sweet, so seductive, synonymous with worth, style, power, but the name was a curse too." By the end, she said, "I don't consider myself to be a particularly ethical person, but I am fair."

Patrizia Reggiani and Maurizio Gucci tied the knot in 1972. In 1985, Maurizio left Patrizia and his daughter for his new girlfriend. The couple officially parted ways in 1994. In 1995, Maurizio was shot dead by a hitman hired by Patrizia. Patrizia faced 16 years in jail for murdering her husband.