Irrfan Khan's Demise: Here's What Tom Hanks Had Said About The 'Coolest Guy In The Room'

After Actor Irrfan Khan's demise, an old quote of Tom Hanks about the late actor surfaced the Internet where the former is talking the "coolest guy in the room.

After Actor Irrfan Khan's demise, an old quote of Tom Hanks about the late actor surfaced the Internet where the former is talking the "coolest guy in the room." In one of his interviews, Hanks had quoted what he had said to Irrfan Khan after meeting him. As per the quote, he has said, "Irrfan Khan, I am going to steal from you everything that I can possibly can."

After mentioning all the things that Hanks can steal from him in terms of acting, he added, "By doing that, I will be doing a very pale imitation of the coolest guy in the room." Tom Hanks had worked with Irrfan Khan in 'Inferno' based on the book of the by Dan Brown. 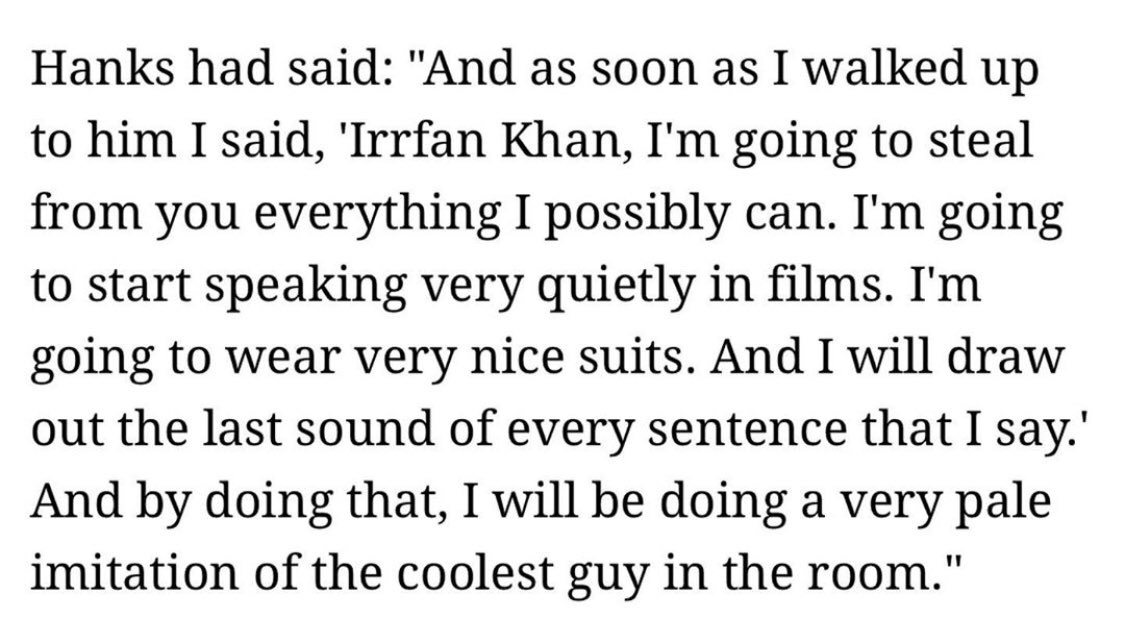 Actor Irrfan Khan passed away at the Kokilaben Ambani Hospital in Mumbai on Wednesday at the age of 53. The actor, who was diagnosed with cancer in 2018, had been admitted for a colon infection on Tuesday. Irrfan Khan's funeral was held at Versova Kabrastan in Mumbai.

The Actor's team announced the news with a statement from him:

“I trust, I have surrendered”; These were the some of the many words that Irrfan expressed in a heartfelt note he wrote in 2018 opening up about his fight with cancer. And a man of few words and an actor of silent expressions with his deep eyes and his memorable actions on screen. It’s saddening that this day, we have to bring forward the news of him passing away. Irrfan was a strong soul, someone who fought till the very end and always inspired everyone who came close to him. After having been struck by lightning in 2018 with the news of rare cancer, he took life soon after as it came and he fought the many battles that came with it. Surrounded by his love, his family for whom he most cared about, he left for heavenly abode, leaving behind truly a legacy of his own. We all pray and hope that he is at peace. And to resonate and part with his words he had said, “As if I was tasting life for the first time, the magical side of it”.

Read: On Irrfan Khan, Mindy Kaling loves what Tom Hanks said about the 'coolest guy in the room'

PEOPLE HAVE PLEDGED SO FAR
LATEST NEWS
View all
2 hours ago
These are Brad Pitt’s highest-rated films according to Rotten Tomatoes
3 hours ago
George Floyd's death: Kylie Jenner says speaking up is long overdue
59 mins ago
Here's why the title of 'John Wick' was changed because of Keanu Reeves; Read here
5 hours ago
Halsey reveals she is preparing for Bar Exam amid lockdown, says 'Law is fun but hard'
34 mins ago
Cardi B shuts down "Loud and Wrong" troll who said Kulture "ignores" her mom, read