The film will be headlined by actors Jonathan Majors and Glen Powell with Outsiders star Christina Jackson playing the female lead, Joe Jonas shared on Insta

Jonas, known for his pop band Jonas Brothers that he formed with brothers Kevin and Nick, joins the film's cast along with actors Thomas Sadoski. The story will narrate the true tale of US Navy fighter pilots, Jesse Brown and Tom Hudner, two young men from different worlds.

"Initiated together into the VF-32 squadron, they are pushed to their limits flying a new design of fighter jet. But their friendship is tested when one of them is shot down behind enemy lines," the official plotline read. Jonas will essay the role of fighter pilot Marty Goode, while Sadoski will star as squadron leader Dick Cevoli. Sophie Turner took to her Instagram handle and wrote, "Dass my baby"! 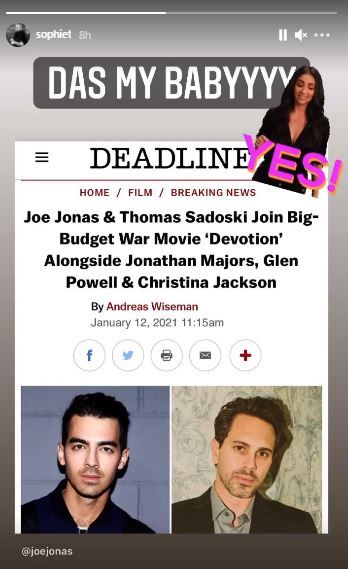 JD Dillard will direct the movie which is based on the book by Adam Makos. Jake Crane and Jonathan A. Stewart have adapted the screenplay. Molly Smith, Rachel Smith, Thad Luckinbill and Trent Luckinbill will produce the film through Black Label.

The Jonas Brothers shot to fame because of their stints on the Disney Channel television. The band released their debut studio album Its About Time in 2006. This album was widely loved by people. Later on, they went on to release other hit albums like Jonas Brothers, A Little Longer and Happiness Begins.

Meanwhile, Sophie Turner and Joe Jonas might not have shared a photograph of their daughter Willa yet, but they love to post moments from their ‘expecting’ phase with their fans. Sophie Turner shared her first post after almost a month, as she felt that her Instagram page needed some content. Joe and Sophie had got married in May 2019. They welcomed their first child Willa in July 2020.