John Cena Gets Candid About His Favourite BTS Member, Says 'ARMY Is Unbelievable'

John Cena made an appearance on The Ellen DeGeneres Show, where he revealed about his favourite BTS star. He also gave a message to the BTS Army. 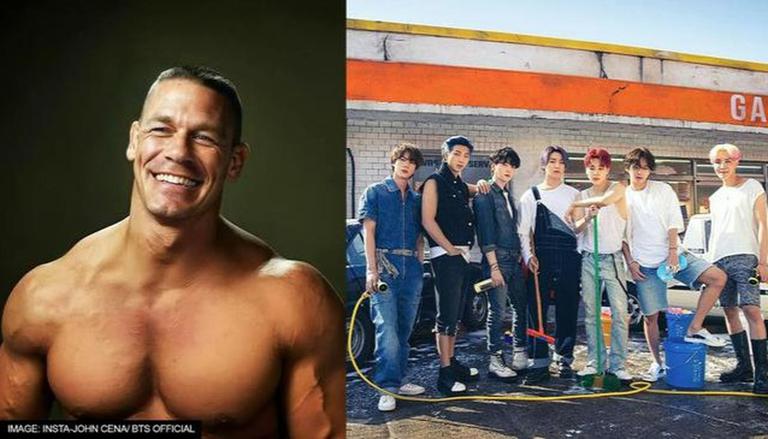 
John Cena currently made an appearance on The Ellen DeGeneres Show, where he revealed about his favourite BTS star. The actor and WWE wrestler is all set to engage in some high octane action in his solo outing as the Peacemaker in the upcoming HBO Max series of the same name.

Replying to the question about his favourite BTS member, John Cena was quick to reply as he said, "RM and J-Hope because they’re like the lyricist guys, not only do I love their fanbase I think the BTS ARMY is unbelievable, I love their message… but they’re also like MCs." Talking about the band's decision of taking a break, the WWE wrestler wished them a happy rest and hoped that everything is going well for them. Cena was also asked about his potential return to WWE for WrestleMania. He answered, "Many good opportunities are coming up, but I'm still not done with WWE by a long shot. That is my home and I love it."

On the work front, John Cena will be next seen Peacemaker, which will be arriving on HBO Max on January 13 and the fans are super-excited to witness John Cena in his solo outing. The Peacemaker series will reportedly drop at 3 am ET for the fans in the US. The audience in India can tune in to the show at 1:30 pm IST. As per a report from Tom's Guide, UK fans will have to wait to watch the show as it will not be released on January 13 in the UK.

The first Extended Universe (DCEU) will be a byproduct of 2021's The Suicide Squad. The web series revolves around the origins of a Peacemaker who believes in achieving peace at any cost. The series has been produced by Troll Court Entertainment and The Safran Company in association with Warner Bros. Talking about the character, creator James Gunn told Variety, ''He’s not an evil person, he’s just a bad guy. He seems sort of irredeemable in the film. But I think that there’s more to him. We didn’t get a chance to know him [in The Suicide Squad] in the way we get to know some of the other characters. And so that’s what the whole show is about. I needed eight episodes to do it, at least.''