A video of man uncontrollably laughing during the court proceedings of Johnny Depp and Amber Heard has gone insanely viral on the internet. Watch it here. 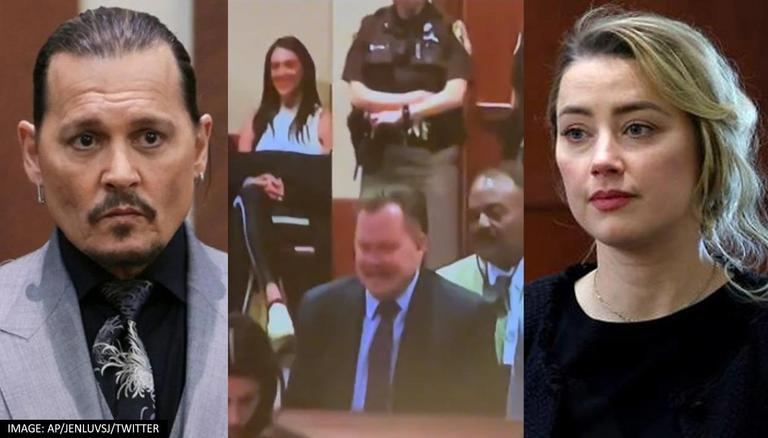 
All the shocking revelations of Amber Heard and Johnny Depp's relationship during their testimony in the highly publicised defamation suit have left the internet shocked. However, their legal sparring isn't the only thing that's making noise on the web. Recently, a video of a man uncontrollably laughing during the court proceedings has gone insanely viral on the internet. The man in question is speculated to be Johnny Depp's entourage, as he can be seen sitting beside the actor's private security guard Sean Bett.

For those unaware, Sean Bett, previously in his testimony claimed that Amber Heard was never abused by the Pirates of the Caribbean star.

Viral video of a man laughing at trial

The footage of the unknown person spread like wildfire on the web after Amber Heard's cross-examination came to its conclusion on Tuesday, May 17. The multi-million dollar legal suit has entered its fifth week and is taking place in Fairfax, Virginia. In the viral clip, two men can be seen covering their mouths as they try to control their laughter. One of them almost ends up crying as he laughs inside the courtroom. Moments later, when his gesture begins to catch the attention of people around them, the man stands up on his own and leaves the place. Take a look at it here:

The internet feels that the man represented everyone who knew about the legal suit in the world. One user said, "Check out this dude! Representing the world," and another wrote, "He’s literally all of us right now." One more chimed in to add, "That man is so me." Take a look at the viral reactions below:

That man is so me. 🙃 https://t.co/LeyaSSRDmT

laughter is contagious as you will see😄🙃 https://t.co/wXo7xWvsoA

I’m so glad someone clipped this ☠️ https://t.co/Rwd8sHGlSR

He’s literally all of us right now 🤣🤣 https://t.co/dEl14NZPVr

😅Check out this dude! Representing the world👇 https://t.co/QG5ICA4oS4

Johnny Depp is suing ex-wife Amber Heard for millions in damage over the op-ed the latter wrote for The Washington Post in 2018. In the opinion piece, Heard referred to herself as a "public figure representing domestic abuse." Although she did not identify Depp in her op-ed, he sued Heard for damaging his personal and professional life. After more than a year of legal battle, Amber Heard countersued Depp alleging that he defamed her when his attorneys released statements calling her allegations of abuse a hoax.

The trail of the highly-publicised Depp-Heard case is set to end on May 27, 2022.