Lilly Singh took up the Dolly Parton challenge and posted a GIF with Linkedin-Facebook-Instagram-Tinder tags. Her hilarious twist tickled fans on social media

Lilly Singh is the latest addition to the 'Dolly Parton Challenge' and her hilarious post was a laughter dose for many. Lilly Singh posted the grid animated GIF on January 25th, 2020 IST. Like many celebs, she too brought together four GIFs in one short video.

One of the video snippets which went under the LinkedIn tag was Lilly in her 'Bawse' look, the second GIF was Lilly Singh in a funny avatar under the tag Facebook. The third one was Lilly in a cool look under the tag Instagram. However, the final tag under Tinder was not really Lilly.

Priyanka Chopra made it into the fourth part of the grid. But Lilly Singh’s caption said otherwise. The popular YouTube star wrote, “Haters will say it’s photoshopped. #DollyPartonChallenge.” For a moment fans believed that it is Lilly Singh but some fans called out on Lilly’s funny take on the 'Dolly Parton Challenge'.

Many fans said that it is indeed photoshopped even though Lilly Singh was adamant about her caption. Many celebrities reacted to the funny GIF and thought it was hilarious. Many fans thought that she was a doppelganger of Priyanka Chopra. 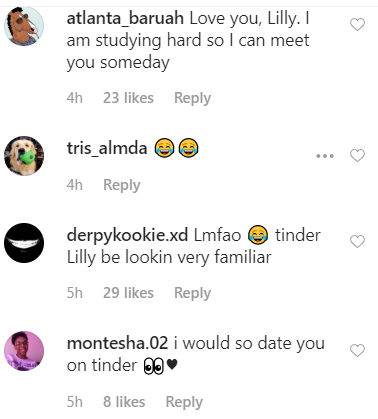 The 'Dolly Parton Challenge' is a viral trend that many celebs and fans are indulging in. It started after Parton posted it on her Instagram and Twitter accounts. Here are some hilarious ones.