Marvel Head Kevin Feige revealed that 'Eternals' is a love letter to Jack Kirby, the late artist behind the original superhero comic introduced in the 1970s. 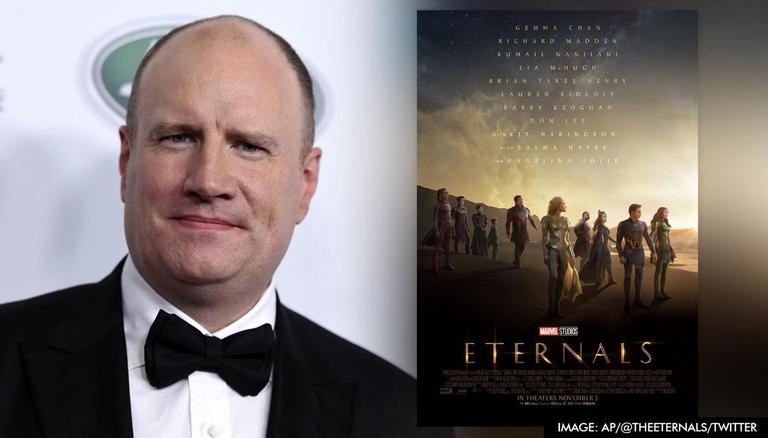 
Ahead of MCUs Eternals release next month, Marvel Studios head, Kevin Feige revealed that the upcoming superhero flick comes as a love letter to the artist behind the original comic, Jack Kirby. As per Feige, the film, which witnessed its World Premiere in Los Angeles on October 17, pays homage to the late creator who gained widespread recognition for his works including Captain America, X-Men, the Hulk, Fantastic Four and many more.

In a conversation with The Hollywood Reporter, Feige said that he regrets not being able to meet Kirby, who couldn't even witness his work translate into some of the most trailblazing projects of the Marvel Cinematic Universe. Kevin iterated that Eternals is dedicated to one man's blazing ideas and his execution of those thoughts in a comic form.

Feige also deems himself fortunate to have worked with Stan Lee, the comic book writer who rose to fame due to cameos in Marvel-based creations. He stated that the audience would have also loved to witness Kirby's cameos in the films like they did with Lee. Kirby's cosmic tale that ranges back to the 1970s has been brought to the big screen with Chloé Zhao's filmmaking and a powerful ensemble cast.

Kirby, who passed away in 1994, was also paid homage at the film's recent premiere, where Deadpool creator Rob Liefeld strutted down the red carpet with Eternals No. 1 copy that he purchased from a local store in his childhood. The film chronicles the Eternals, an immortal alien race, as they emerge from hiding after thousands of years to protect Earth from their evil counterparts, the Deviants. Helmed by Chloe Zhao, it includes an entourage of superheroes played by Angelina Jolie, Salma Hayek, Gemma Chan, Kit Harrington, Richard Madden and more.

With its release, Eternals will join the likes of Black Widow and Shang-Chi and the Legend of the Ten Rings to become the latest instalment in MCU's phase four. Produced by Marvel Studios and distributed by Walt Disney Studios Motion Pictures, the film will have a theatrical release in the United States on November 5, 2021.

READ | Did Angelina Jolie spill the beans on 'Eternals' sequel at the world premiere? Watch

READ | Here’s why Scarlett Johansson and Kevin Feige were against OTT release of ‘Black Widow’
READ | 'Loki' Season 2 might begin filming in 2023 reveals Kevin Feige; 'Not being evasive'

WE RECOMMEND
Eternals vs Captain Marvel: Who would win fight? MCU producer reveals
BTS' Jimin, V’s song 'Friends' with Celin Sharma's 'Nach Mera Hero' included in 'Eternals'
Marvel's new movie 'Eternals' may have a 'Superman' reference in its trailer; Watch
Did Angelina Jolie spill the beans on 'Eternals' sequel at the world premiere? Watch
Kumail Nanjiani wears a sherwani at 'Eternals' premiere, reveals story behind the outfit
Listen to the latest songs, only on JioSaavn.com