The night of the Met Gala 2021 witnessed several high profile celebrities gracing the red carpet with their unique interpretations of the exhibition's theme. 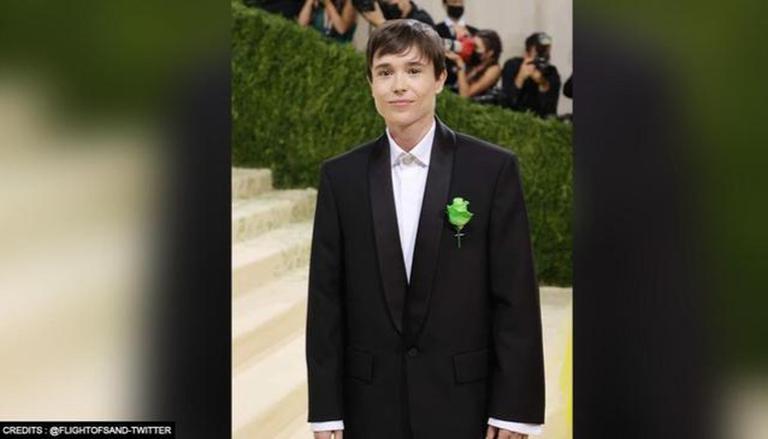 
Several high profile celebrities paraded the red carpet of the Met Gala 2021 on September 13. Sticking to this year's exhibition theme 'In America: A Lexicon of Fashion', stars like Kim Kardashian, Rihanna, Billie Eilish, and more stunned the netizens with their unique interpretations. With social media going haywire over the visuals emerging from the global event, actor Elliot Page is winning the hearts of several people for his first-ever high profile appearance.

The Umbrella Academy actor walked down the red carpet at the Metropolitan Museum of Art in New York. Sporting a Balenciaga suit paired with matching black sneakers. The actor accessorized his classy suit with a green rose. This would mark the 34-year-old actor's first red carpet appearance since coming out as transgender in November last year.

Several fans expressed their happiness as the actor made a high profiled public appearance. However, the internet was torn between liking Page's simple yet classy look while some expressed their disappointment as he went opposite to the Gala's over-the-top outfits. One user wrote, ''Elliot Page having zero drips at the Met Gala must have been the most gender euphoric moment of his life.'' as another fan gave in to Page's cuteness writing, ''This is Elliot Page’s 1st red carpet appearance and he looks cute so I’m giving him a pass even though the tux is NOT tailored to him and the green flower is questionable and the sneakers do not fit for an event like the #MetGala !!''

Me when I see a dude in a black tux at the Met Gala: ugh, what's the point of you?

Me when I see Elliot Page in a black tux at his first Met Gala since coming out: perfect, 10/10, no notes. pic.twitter.com/FH0yKqOs8g

●Elliot Page in Balenciaga❤️❤️❤️
‘While the event was a first for many, for Elliot Page it was a significant moment. Having come out as trans during lockdown, the Met Gala was Page's first major red carpet under his new name. And he looked right at home.’https://t.co/zqRivx5GBg pic.twitter.com/ETmYDCqbYq

There were some netizens who appeared upset with the actor's outfit as one user wrote, ''I need to get this off my chest. I've seen a lot of people talking about Elliot Page's outfit at the #MetGala and saying he gets a pass cause he's cute. No, he doesn't. Hold him to the same standard as the other men who showed up in boring suits. Stop infantilizing trans men.''

The actor came out as transgender last year on social media and set the internet ablaze. After receiving an overwhelmingly positive response from the netizens, the actor was also conferred with the Achievement Award at the LGBTQ film festival Outfest this year.

READ | Was Kanye West the mystery man with Kim Kardashian at Met Gala 2021?