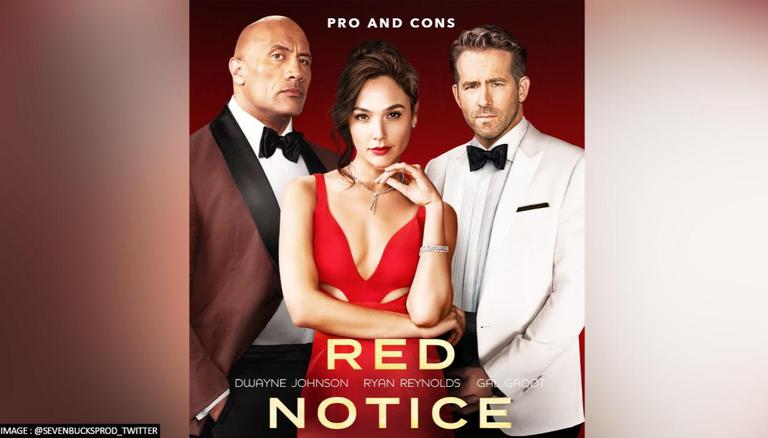 
The much-awaited film Red Notice recently hit the theatre screens worldwide. The star-studded film casts Dwayne Johnson, Gal Gadot and Ryan Reynolds in lead roles. While the film is yet to debut on Netflix, here are its IMDb and Rotten Tomatoes ratings so far.

Red Notice was one of the most-awaited films of the year due to its star cast and plot. Fans were eager to watch how the chemistry between Dwayne Johnson, Gal Gadot and Ryan Reynolds will unfold in this film. Soon after the film's theatrical release, viewers shared their reviews of the film on the internet. While some found it absolutely hilarious, others were not entertained by its heist-comedy script. Amid the mixed reviews, the film currently has an IMDb rating of 7 on 10 after 332 votes. On the other hand, Red Notice's Rotten Tomatoes rating is 35% after 40 reviews. The film's audience score has not been calculated yet due to the insufficient number of votes.

Red Notice follows the story of a Federal Agent, played by Dwayne Johnson, and his hunt for a mysterious but very talented thief (Gal Gadot). During his quest, he joins hands with the world's most wanted thief and Gadot's enemy, played by Ryan Reynolds. The film's official synopsis reads, "An FBI profiler pursuing the world's most wanted art thief becomes his reluctant partner in crime to catch an elusive crook who's always one step ahead." The film is directed by Rawson Marshall Thurber, while Seven Bucks Productions and Flynn Picture Company bankrolled it. The film also cast Ritu Aarya, Tom Choi, Melissa Kennemore, and Max Calder in supporting roles.

READ | Shadow and Bone's IMDb and Rotten Tomatoes reviews; see the ratings of the Netflix series

Rawson Marshall Thurber on working with the film's trio

In an interview with Empire Magazine, Thurber opened up on working with the Red Notice star-studded cast. The director revealed he was delighted to work with Dwayne Johnson, Gal Gadot and Ryan Reynolds altogether. He addressed them with their superhero characters and called them Black Adam, Wonder Woman and Deadpool. He also called himself fortunate to get an opportunity to work with the three. He further shared how the chemistry between the leads is not a function of directing or writing but casting and the film's star cast had something special. The film will release on Netflix on November 12, 2021.

READ | Gal Gadot opens up about shooting 'Red Notice' amidst pandemic, says 'it was crazy'

WE RECOMMEND
Dwayne Johnson pledges to stop using real guns on future productions after 'Rust' tragedy
'Red Notice': Ryan Reynolds, Dwayne Johnson & Gal Gadot stun on red carpet with glamour
Netflix is ready to serve 'Red Notice' in the latest trailer; Watch
Gal Gadot opens up about shooting 'Red Notice' amidst pandemic, says 'it was crazy'
Ryan Reynolds opens up about sabbatical, says he wishes to spend 'quality time' with kids
Listen to the latest songs, only on JioSaavn.com