Tom Cruise has sent the entire K-pop fandom into a frenzy during his stay in Korea to promote his film Top Gun: Maverick. Check out to know why. 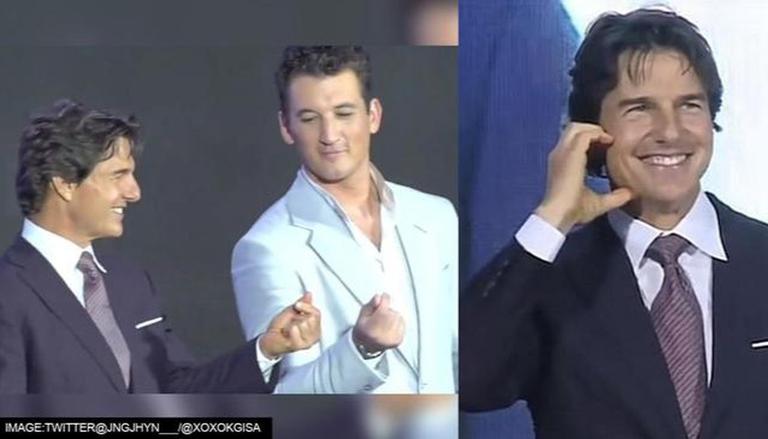 
Hollywood actor Tom Cruise landed in South Korea with co-star Miles Teller to promote his latest blockbuster Top Gun: Maverick. The action film made waves across the world with its exceptional box office business. Pictures and videos from his promotional activities in the country show that the veteran actor has quickly adapted to the culture.

A video of Tom Cruise with the team and cast of Top Gun: Maverick in South Korea is making rounds on the internet. In the video, the 59-year-old actor is seen doing various heart signs and seemingly enjoying doing them. Moreover, he is also seen teaching his co-star Miles Teller to curl his fingers in a heart shape. He is also seen making a half-heart shape on his face, a popular heart sign in the K-pop community and popularly known as 'Aegyo'.

for me it's tom cruise sunbaenim giving a masterclass on how to do a proper finger heart to miles teller pic.twitter.com/GH1majY5pP

The videos have sent the entire K-pop fandom into a frenzy as making heart signs is popular among K-pop celebrities as a display of affection towards the fans on stage. Many also declared the Hollywood star a K-pop idol after the video went viral. One fan wrote, ''Never knew I’ll get a chance to see this aegyo Tom Cruise sunbaenim (Senior) in this lifetime (sic)'' while another tweeted, ''Since bts are gonna be on a break I have decided to stan Tom cruise sunbaenim (sic)''.

Additionally, a fan also asked Cruise to perform the Gyaru peace sign, an upside-down/inside-out peace sign popularly done by K-pop idols. Notably, he is seen confirming to the interpreter the meaning of the peace sign shown by the fan.

Moreover, BTS fans were also excited about Tom Cruise's visit as they flooded social media with collaboration requests between the Hollywood star and member Jin. In 2020, Jin took a picture in the photobooth during his appearance on The Late Late Show with James Corden with his band. He placed his picture beside Cruise's photograph and wrote, "The space next to Tom Cruise hyung was vacant, so I quickly took it''.

is tom cruise trying to send a message to seokjin pic.twitter.com/J1uzTrUfU0