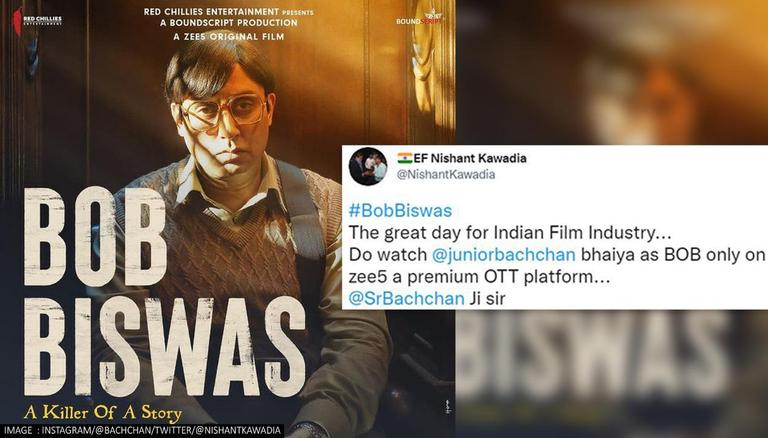 
Abhishek Bachchan starrer highly anticipated film Bob Biswas has finally hit the OTT platform on December 3. The film helmed by Sujoy Ghosh's daughter Diya Annapurna Ghosh and bankrolled by Sujoy Ghosh is a spin-off to the 2012 crime thriller Kahaani starring Vidya Balan in the lead. Soon after the release, the film received spectacular reviews from the fans who were amazed to see Abhishek in the titular role.

Touted to be a spin-off of Kahaani, the crime thriller revolves around the character Bob Biswas who wakes up from a prolonged coma and finds himself in a moral dilemma as he is forced to face his past. Apart from Abhishek, the film also stars Chitrangda Singh and Paran Bandopadhyay in pivotal roles. The film seems to have resonated well with the audience who were happy to watch Abhishek Bachchan in the lead role. Fans were impressed to watch the much-awaited film that faced multiple delays due to the ongoing pandemic.

Twitterati express their love for Abhishek Bachchan in Bob Biswas

One of the users who loved the storyline wrote, “All the very best May #BobBiswas beats all records and be a stupendous success and of course the turning point for @juniorbachchan.” Another user wrote, “#BobBiswas mind-blowing thriller and suspense movie, a must watch and best movie. Wah jee wah @juniorbachchan you nailed it.” A third shared a clip from the film and wrote, “Hatts off to @juniorbachchan. You just nailed it.. @sujoy_g Master classic on the floor.” Another echoed similar sentiments and wrote, “#BobBiswas is now streaming on @ZEE5Premium & As expected what a stellar performance delivered by @juniorb.”

All the very best👍🏻 May #BobBiswas beats all records and be a stupendous success and of course the turning point for @juniorbachchan. and many congratulations for 1000th episode of KBC. Wishing you miles and more always💐

In a Press Release statement, director Diya Annapurna Ghosh mentioned that she's grateful to Bachchan, Chitrangada, and the entire cast of the film, who shaped the project into reality. "I have had the most fantastic experience designing ‘Bob Biswas’, a crime-drama that has a love story in its essence." Earlier, ahead of the film’s release, Amitabh Bachchan praised his son in a unique way by reciting a poem, where he called the latter "My pride, my son, my inheritor". Taking to his Twitter handle, he uploaded the monochrome video, coupled with a quote by Amitabh’s father & poet Harivansh Rai Bachchan. The film is streaming on ZEE5 app for premium users.