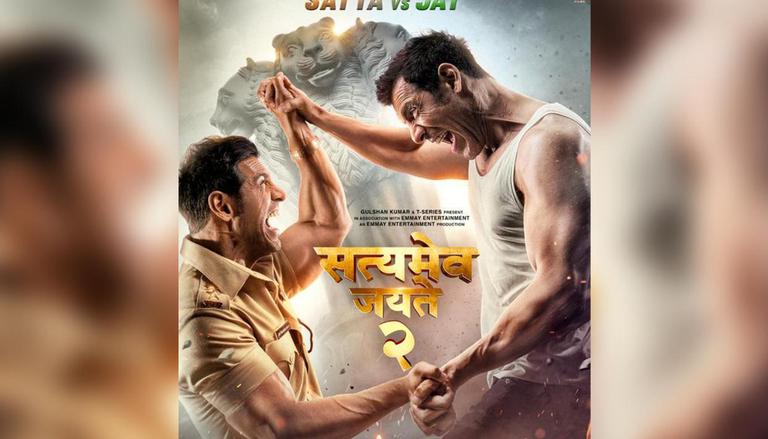 Satyameva Jayate 2 will see not one or two but the triple role of the Bollywood star John Abraham. Divya Kumar Khosla also serves as the leading lady of the film and going by the first Twitter reactions, she did full justice to her role. While fans were extremely excited about the film, here is what they have to say about this action-packed drama.

Taking to Twitter, several viewers mentioned the new film is full of entertainment and action. A user mentioned that Satyamev Jayate 2 will be a gamechanger and listed a few things which they liked about the movie. The tweet read, "SatyamevaJayate2 is an out-and-out #JohnAbraham show. Springs a big surprise. SJ2 will be a gamechanger. Will develop a massive mass following with this one... #Divya is wonderful... Drama, action, dialogue stand out in this fast-paced entertainer!" Another user mentioned the film was filled with action and masala and wrote, "SJ2 has mass written all over it... Milap Zaveri pays tribute to the cinema of Manmohan Desai, Prakash Mehra, Rakesh Roshan and the successful masala entertainers of yore."

#SatyamevaJayate2 is an out-and-out #JohnAbraham show. Springs a big surprise. #SJ2 will be a gamechanger. Will develop a massive mass following with this one... #Divya is wonderful... Drama, action, dialogue standout in this fast-paced entertainer! #SatyamevaJayate2Review pic.twitter.com/4TjBW1hBMJ

The sequel seemingly received fairly good reviews with an average of 3 to 3.5 rating by some film critics. One of the users called the film a rollercoaster ride of entertainment and wrote, "@TheJohnAbraham excels in Triple role, his punchy dialogues & fight sequences will engender lots of seetiya & taaliya." "@MassZaveri  direction promises a MASS feast for the heartland audience," the user added. Another one called the movie a "Paisa Vasool family entertainer."

Satyamev Jayate 2's plot revolves around two identical twin brother and their battle against corruption. While one is the antagonist, another one is a police official. The film cast John Abraham in three roles, while Divya Koshla Kumar plays the leading lady. The film also casts Gautam Gulati in lead role. The film came out today on November 25, 2021.