The popular BTS Permission to Dance on Stage concert in LA that created a buzz among the fans had a great show on the fourth day with a surprise for fans. 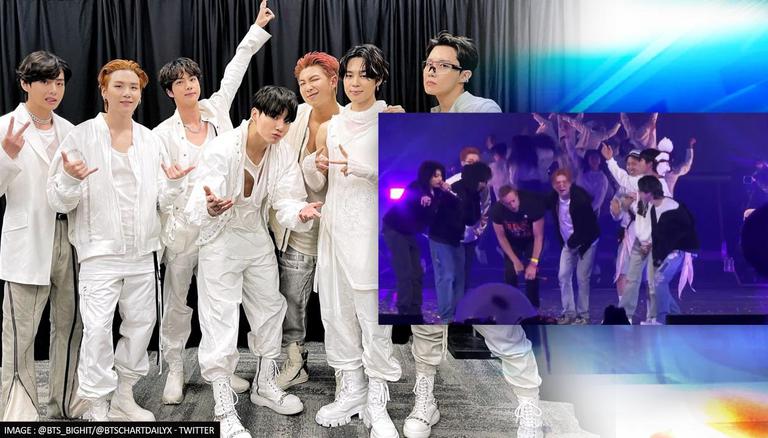 
The popular BTS Permission to Dance on Stage concert in LA that created a buzz among the fans had a great show on the fourth day. Just when the fans thought that the show is inching towards the end, a surprise entry stunned all. Coldplay‘s Chris Martin join BTS boys on the stage to give a special end to the concert with their My Universe performance.

The singer was spotted wearing black jeans and a t-shirt with ‘BTS Permission To Dance On Stage’ written on it. Together, BTS and Coldplay sang their recent collaboration My Universe that had become a hit soon after it was released. The entire stadium that witnessed a full house show reverberated with the sound of the band and the fans who sang along with the band. Several videos from Chris Martin’s performance have been surfacing on social media.

Chris Martin is not the only Hollywood celebrity to grace the stage and perform with the band. Earlier on day two of the mega show, American rapper Megan Thee Stallion joined the septet for a ‘smooth like butter’ performance. Megan Thee Stallion also joined BTS boys on the stage and sang their award-winning song Butter. Apart from this, American singer Halsey was also spotted at the stadium attending the concert on the third day of the show.

Meanwhile, as the Army is still trying to get over with the thrilling BTS Permission to Dance concert held in Los Angeles, the famous K-pop boy band has now announced their next concert. On the last day of the four-day BTS Permission to Dance concert in LA, they took to their official Twitter handle and announced they will soon be meeting their fans in Seoul for their BTS next concert. They further unveiled the BTS concert date and stated that it is slated for March 2022.

Currently stationed in the USA, the 7-member South Korean idol group kickstarted their Permission to Dance on Stage concert on November 27 with the concert concluded on December 2. They are also readying to perform at the 2021 iHeartRadio Jingle Ball Tour on December 3. It was recently reported by Sports Donga that the group will not attend the hotly buzzed Mnet Asian Music Awards this year due to their conflicting schedules.