BTS' 'My Universe' With Coldplay Debuts At No. 1 On Billboard Hot 100

BTS and Coldplay's collaboration, 'My Universe', is being celebrated worldwide as it recently reached the number one rank on Billboard Hot 100. Read further. 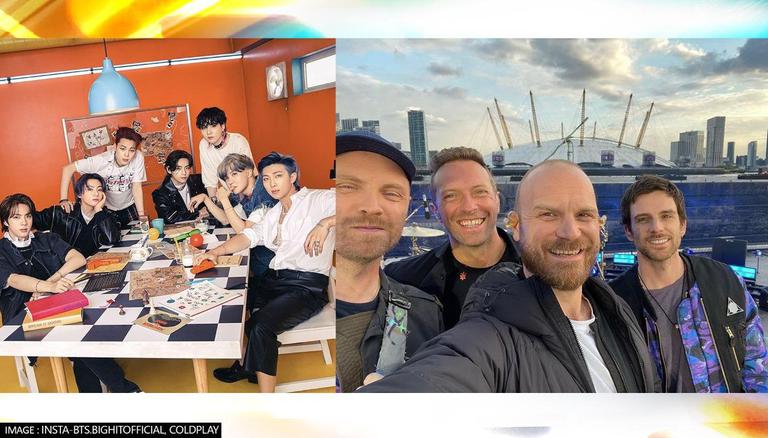 
As the popular Korean boy band, BTS recently collaborated with Coldplay for their new single, My Universe, the fans garnered tons of love and praises on to the song. It was recently revealed that BTS broke the new record with Coldplay when their single debuted at number one on Billboard Hot 100.

On October 4, 2021, Billboard took to their official Twitter handle and revealed that BTS and Coldplay’s new collaboration debuted at Number 1 on the Hot 100. According to Billboard, My Universe topped with 11.5 million streams in the United States, 5.5 million radio airplay audience impressions, and 127,000 downloads and physical singles. BTS and Coldplay released the single, My Universe, on September 24, 2021, with BTS having this as the sixth song to top the list while Coldplay’s second song.

BTS songs that were earlier added to the list of Billboard Hot 100 are:

With this achievement, the boy band also became the second-fastest group to get six Number one tags in a year after The Beatles’ record of one year and two weeks in 1964-1966. My Universe also takes No. 1 on both the Billboard Global 200 and Billboard Global Excl US charts and has managed to get 95.4 million streams and 142,400 downloads worldwide between September 24 and 30, with 84.4 million streams and 90,500 downloads recorded outside the US. It is BTS’s sixth No. 1 on the Global 200 and fifth on the Global Excl US.

READ | Inside 'My Universe': BTS and Coldplay work harmoniously in special documentary; WATCH