BTS' main rapper Suga has added another title to his name after his solo track Daechwita crossed over 300 million views on Youtube. Read more. 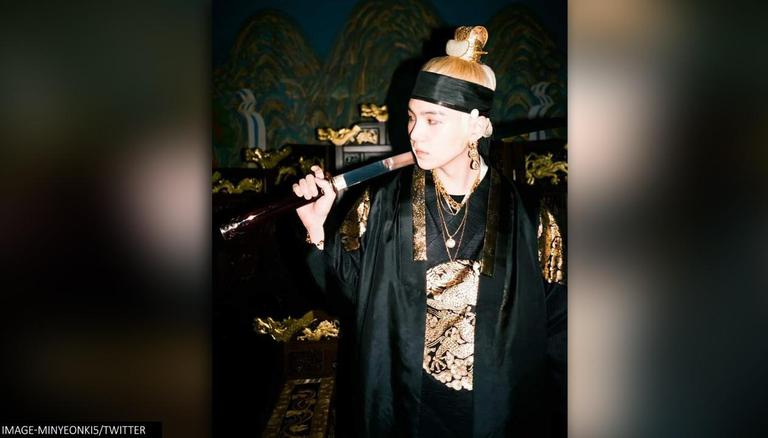 
Rapper of the South Korean boyband BTS, Suga, has added another title to his name by crossing over 300 million views on Youtube with his solo track Daechwita. Released almost a year ago, the track marks Suga's first solo music video which was highly appreciated by the fans for its visual appeal and high scale production. It was released under his rapper name Agust D, a rearrangement of his name, with the last two letters deriving from his birthplace, Daegu Town, and the rest of the letters being 'Suga' spelt backwards.

Adding another milestone to BTS' name, Suga's, birth name Min Yoon-gi, solo track Daechwita's music video has crossed 300 million views on Youtube at 9:35 am KST/6:05 am IST on October 7. The music video released on May 22, 2020, under Agust D. This marked BTS' member's second solo music video to cross the mark with J-Hope’s Chicken Noodle Soup being the first one to do so.

The track is part of Suga's second mixtape, 'D-2' featuring a unique beat along with traditional military music known as Daechwita with a medley of traditional Korean music. The music video featuring the rapper received critical appreciation with many commending the colours, hanbok and sword fighting in the video. Additionally, the track made Suga the first Korean solo artist to enter the U.S' Billboard 200 album chart and the main singles chart Hot 100.

READ | As BTS tops Billboard Hot 100 for the 6th time, here's a look at their previous 5 records

The South Korean boyband is not only known for their distinguished and catchy style of music but also for their humongous fan base spread across the globe. As soon as the news broke out, ARMY were quick to take to Twitter to trend the hashtag #Daechwita300MViews to congratulate the rapper.

Daechwita 300 MILLION VIEWS congratulations AGUST D
I’m sosososo proud of you! thank you for sharing your talents, your music with us💜🎊

Many shared snippets from the music video while some wrote a heartwarming note to share their love and support. One fan perfectly summed up ARMY's appreciation for the song by writing, ''Agust D didn't come to play when he released Daechwita. Such beautiful visuals, vocals, rap, costumes, traditional instruments...the entire MV is a delight.''

Many more Millions are waiting for us ... thanks to all the Army who stream dacehwita and make it possible.. no doubt Army are the Best..

The band was recently grabbing headlines for their successful collaboration with popular rock band Coldplay for the track My Universe which topped the Billboard Hot 100 chart. They were also lauded for raising $3.6 million and gathering millions of tweets during four years of joining UNICEF to end violence and bullying

WE RECOMMEND
BTS' 'My Universe' With Coldplay Debuts At No. 1 On Billboard Hot 100
BTS: Complaint filed against Jungkook in Fair Trade Commission, ARMY extends support
After BTS, Coldplay joins hands with Selena Gomez for new album; watch teaser
BTS' ARMY trends 'Protect Jungkook' as singer gets accused of backdoor advertising
BTS campaign with UNICEF raises $3.6 million and generates millions of tweets in support
Listen to the latest songs, only on JioSaavn.com