BTS, TXT And Enhypen To Get Their Own Webcomics, Webnovels Helmed By Webtoon & Wattpad

Webtoon, a digital comics platform, and Wattpad, a platform for original narratives, have teamed together to release a new series of webcomics and web novels. 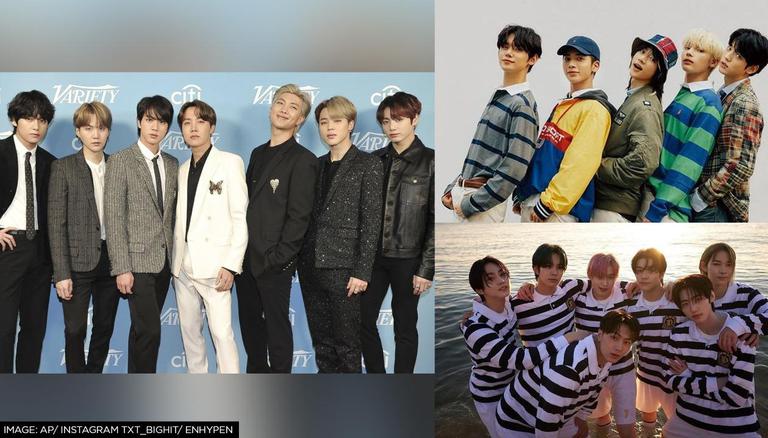 
Webtoon, a digital comics platform, and Wattpad, a platform for original narratives, have teamed together to release a new series of webcomics and web novels featuring some of the world's popular K-pop artists. The new series, which will debut on January 14 with six original webcomics and online novels, will be produced by HYBE, the same firm that produces BTS, Tomorrow X Together (TXT), and Enhypen. Webtoon will host three original webcomics created in conjunction with HYBE artists, while Wattpad will host three web novel adaptations.

The first Hybe original narrative, 7Fates: CHAKHO, will be released on January 14 with BTS. On January 15, Enhypen's Dark Moon will be released, followed by TxT's The Star Seekers on January 16. The announcement was made during the 2021 Hybe briefing with Community session.

Webtoon's previously announced Super Casting project, a new collection of agreements with worldwide entertainment firms to create webcomics or web novels for each platform, includes the new slate of content.

BTS, TXT and Enhypen to get their own webcomics, web novels, helmed by Webtoon & Wattpad

With Super Casting, large entertainment brands may collaborate with Webtoon to maximise the IP value chain across platforms and formats. Webtoon debuted a new original series, Batman: Wayne Family Adventures with DC, as its first collaboration partner in September, and it quickly surpassed 500,000 members.

7Fates: CHAKHO with BTS is the first HYBE original story, and it follows seven young men who are tied by fate. They must become a unified group of seven to unlock their destiny after growing up together through a series of hardships and tribulations. 7Fates: CHAKHO is an urban fantasy story set in the near future, inspired by the Joseon Dynasty's "Chakhogapsa" tiger hunters. Traditional Korean tiger legends and a mystical world of wild monsters are reimagined in this fiction.

Dark Moon by Enhypen combines urban fantasy and young romance. The story follows a group of vampires, a pack of werewolves, and a fascinating girl with a secret as they face-off, become confused, and develop chemistry. Dark Moon will be the first in a series of stories, beginning on January 15 with Dark Moon: The Blood Altar.

The Star Seekers is a TXT film about a group of young men in a pop band who live on a planet where magic is commonplace. The trio discovers they have dormant magical abilities when they awaken one day. The story includes fantastical animals, magic, and a glimpse into the entertainment industry. According to JunKoo Kim, founder and global CEO of Webtoon Entertainment, webcomics and web novels are some of the most exciting categories in global entertainment, with a growing creator economy of superstar creators, massive fandoms around the world, and diverse IP fueling a new era of adaptations in TV and film.

READ | BTS' song to feature in 'Sing 2', joins line-up of singers like Taylor Swift, U2 & more

WE RECOMMEND
BTS' V leaves fans in splits after revealing his wish to marry band members
BTS member Jin's OST 'Yours' for Korean drama 'Jirisan' all set for release this November
BTS Leader RM's hilarious banter with fans will leave you in splits; Take a look
Halloween 2021: Take a look at all the spooky costumes BTS has worn
BTS ARMY member seeks Jimin's help, band leader RM responds to fan
Listen to the latest songs, only on JioSaavn.com