Britney Spears revealed that she is writing a book about a 'girl's ghost', days after her father Jamie Spears was suspended as the conservator of her estate. 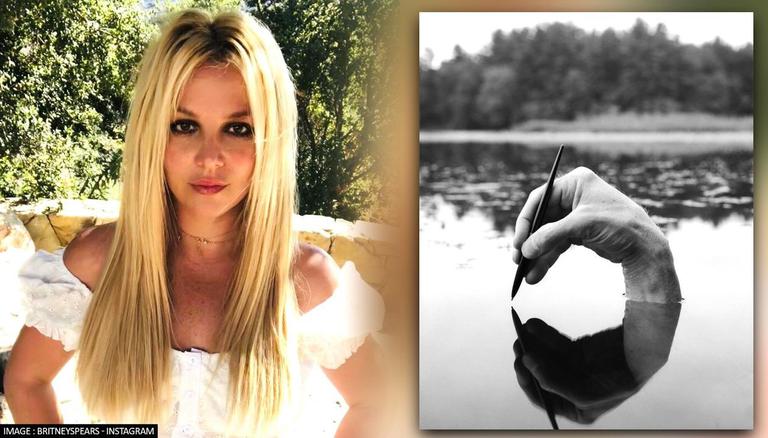 
Singer-songwriter Britney Spears is putting pen to paper for a book centred on a girl, who 'gets stuck in limbo' because of 'trauma and pain'. Soon after her legal victory against Jamie Spears in the conservatorship battle, Britney has been quite active on her social media handles, sharing quotes on healing, calling out her family through cryptic posts, and now, revealing about her latest book writing venture. The 30-year-old posted a monochrome image of a hand coming out of the water while holding a pen and mentioned that her book entails the story of a girl who was murdered, adding that her spirit 'doesn’t know how to cross over' to the world she knew. She also mentioned the girl's choice to 'greet the same people who murdered' her or 'create a whole new life' after she comes out of her perils.

Taking to her Instagram handle recently, the Toxic singer shared a post titled, "I’m writing a book". Adding that it's based on a girl who has been murdered, she wrote, "After being stuck in limbo for three years, she is a ghost who thrives off of her reflection in her mirror 🪞for existence!!!! She has no one she can trust but something happens and she figures out how to cross over to the world where her family is !!!!".

Further mentioning that the girl has a choice to change her life or get drawn into old habits, she added, "She no longer needs her mirror … she found a portal by citing certain prayers constantly that give her the insight and gift to not be scared anymore and come out of limbo … but what I will leave to the IMAGINATION 💭 is what she does when she crosses over …… besides learning to write her name again."

The post comes days after Jamie Spears' suspension, following which John Zabel, an accountant, has been appointed to serve as a temporary conservator till December 31. As per People reports, the end of Jamie's conservatorship comes after Judge Brenda Penny suspended Spears Sr, 'in the best interest of the conservatee' and further maintained that her ruling is not appealable.

WE RECOMMEND
Britney Spears says she has 'a lot of healing to do' after her court battle
Britney Spears' father Jamie suspended as her conservator after 13-year arrangement
'Controlling Britney Spears': Documentary reveals Britney's calls & texts were monitored
Britney Spears' sons receive a special birthday post by their pop star mom
Britney Spears' ex-husband Kevin Federline happy about conservatorship win; 'as long as..'
Listen to the latest songs, only on JioSaavn.com