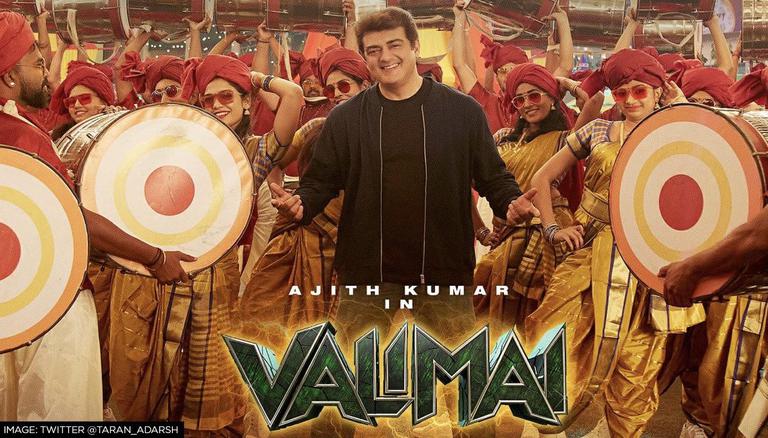 
Ajith Kumar's cop drama Valimai has been making rounds ever since it was announced, with ardent fans of the star waiting to catch his glimpse on the big screen. Earlier slated to premiere in Tamil, makers of the project have now decided to come out with the film's dubbed versions in Hindi and Telugu as well, catering to Ajith's fanbase across the country.

Bankrolled by Boney Kapoor, the film has wrapped up its shoot and is currently in its post-production stage. Billed as a full-fledged actioner, Valimai also stars Huma Qureshi, Kartikeya Gummakonda, Yogi Babu, and others in pivotal roles.

Ajith Kumar's Valimai to also release in Hindi and Telugu

Taking to his Twitter handle on Friday, December 24, trade analyst Taran Adarsh announced the latest update along with the film's poster. He wrote,"#BreakingNews… The much-awaited #Tamil film #Valimai to release in #Hindi and #Telugu. #ValimaiUpdate."

The news comes days after the film's Whistle Theme music video was released, encapsulating Ajith's fierce avatar. The music of the theme video is composed and arranged by Yuvan Shankar Raja. Meanwhile, Ajith will be seen donning the hat of a cop, while Tollywood star Karthikeya Gummakonda will play the main antagonist. Apart from the aforementioned stars, artists like Yogi Babu, Gurbani Judge, Sumithra and others will essay pivotal roles.

READ | Why was Ajith Kumar conferred the title 'Thala' and what does it mean?

In a conversation with Pinkvilla, producer Boney Kapoor stated that he has visited the film's sets many times, where he saw Ajith putting in a lot of effort to do all the stunts by himself. From riding a bike to the wheely among other things, Kumar has done it all, quipped Kapoor. The film also marks Ajith's second collaboration with Boney Kapoor and director H Vinoth after the 2019 project, Nerkonda Paarvai.

Meanwhile, Ajith recently released a statement, urging fans and media houses to not address him with the prefix 'Thala'. "The respected members of the media, public and genuine fans. I henceforth wish to be referred to as Ajith, Ajith Kumar or just AK, and not as ‘Thala’ or any other prefix before my name. I sincerely wish you all a beautiful life filled with good health, happiness, success, peace of mind, and contentment forever. Love, Ajith.", he wrote.