As restrictions are being eased down by theatres and with festivities all around, this year several stars are set to make Diwali more memorable. Read on. 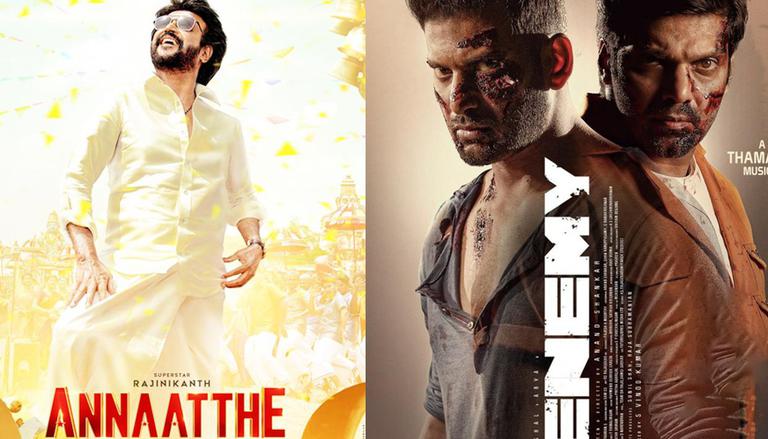 
As restrictions are being eased down by theatres and with festivities all around, this year several stars are set to make Diwali more memorable. From Rajinikanth starrer Annaatthe to Anand Shankar’s directorial Enemy, this Diwali, it's going to be super thrilling for the fans.

Theatres in Tamil Nadu are going to witness four Tamil movies whereas the other two films are to drop in OTT platform on November 2 and 4.

The first one is Anaatthe starring Rajinikanth under the direction of Mass Director Shiva will be released in theaters on November 4 as a Diwali gift for his fans who are excited to watch the actor back on screen after a long gap. The music of the film is given by D Imman. Apart from Rajinikanth, the film also stars Meena, Khushboo, Nayanthara, and Keerthi Suresh in important roles. The film is slated to release theatrically on November 4.

Anand Shankar’s directorial, Enemy, an action thriller starring Vishal and Arya in the lead roles. The music of the film is composed by S Thaman. Meanwhile, the film also features Prakash Raj and Mamta Mohandas. The film is also scheduled to be simultaneously released in Tamil and Telugu languages theatrically on November 4, 2021.

Tamil actor Suriya starrer Jai Bhim was released on November 2 on Amazon Prime Video. The film is directed by T.S. Gnanavel. The multilingual film was released in Tamil, Telugu, and Hindi. It received appreciation from Tamil Nadu CM MK Stalin, Kamal Haasan, and more who were completely in awe of the film and the actor.

Gully Rowdy is an entertaining film starring Sandeep Kishan as the hero. The popular OTT will be streaming on Disney + Hotstar from November 4. Directed by G. Nageswarareddy, the film was produced by Kona Film Corporation and MVV Cinemas.

Maruti's movie Manchi Rojulu Vachayi starring Santosh Shobhan and Mehreen will be released in theaters on the auspicious occasion of Diwali on November 4. The movie is jointly produced by UV Concepts and Mass Movie Makers. The movie unit says that the whole thing is entertaining and will entertain audiences from all walks of life.