Nayanthara, Prithviraj Sukumaran will be headlining Alphonse Putharen's highly anticipated film 'Gold', the official poster of which was unveiled recently. 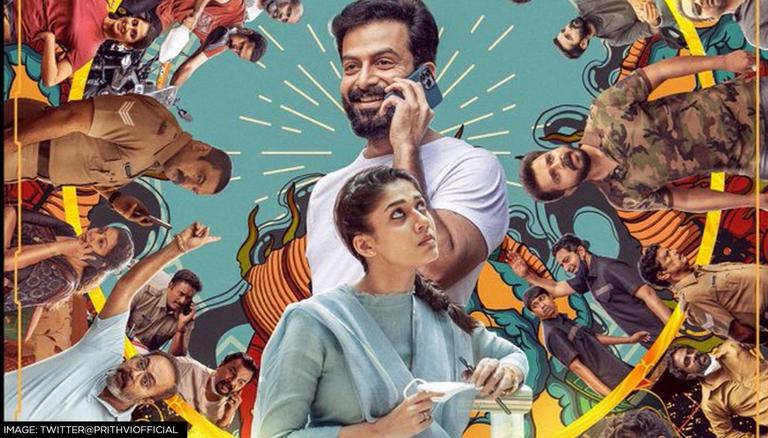 
Nayanthara and Prithviraj Sukumaran will be headlining director Alphonse Puthren's highly anticipated film Gold, the official poster of which was unveiled recently. The quirky-looking poster features the leading duo alongside Lalu Alex, Shammi Thilakan, Ajmal Ameer, Baburaj, Mallika Sukumaran, Prem Kumar, and Shanthi Krishna among many others. Bankrolled by Supriya Menon and Listin Stephen, Gold will reportedly be released on August 19, 2022.

Taking to his Twitter handle on Monday, June 6, Prithviraj dropped the poster where he can be seen talking over the phone right at the centre, while Nayanthara appears below him wearing a suit. The film's ensemble cast is also seen in fun, quirky avatars. In the caption, he mentioned, "#GOLD An #AlphonsPuthran Film!" Take a look.

The leading duo started shooting for the film back on September 8, 2021. It was launched with a puja ceremony. It has been written, edited and directed by Alphonse Putharen, who is returning behind the lens after a 7-year hiatus following the release of his phenomenal hit Premam. Prithviraj will be seen as Joshi S, while Nayanthara's character has been named Sumangali Unnikrishnan.

Rajesh Murugesan is the film's music composer, while Anend C. Chandran and Viswajith Odukkathil are handling the cinematography. Director Puthren is also said to have worked on the stunt choreography, visual effects, colour grading and animation titles of the project.

In a social media note on May 25, Puthren mentioned that the project is nearing the completion of its post-production work. He wrote," #Gold Final edit, CG works, Poster Design, Music, Sound Design works are going on in Full Swing. We all are making it for you all with love and passion,"

Prithviraj was last seen in Dijo Jose Antony's film Jana Gana Mana, which hit theatres on April 28, 2022. It also starred Suraj Venjaramoodu, Vincy Aloshious, Anand Bal, Siddique, Benzi Mathews and others in pivotal roles. On the other hand, Nayanthara will be seen in the suspense thriller O2. She was last seen in the romantic comedy-drama film Kaathuvaakula Rendu Kaadhal.