'Jai Bhim' released on Amazon Prime Video on November 2 and although it received heaps of positive reviews, it also sparked a debate online. 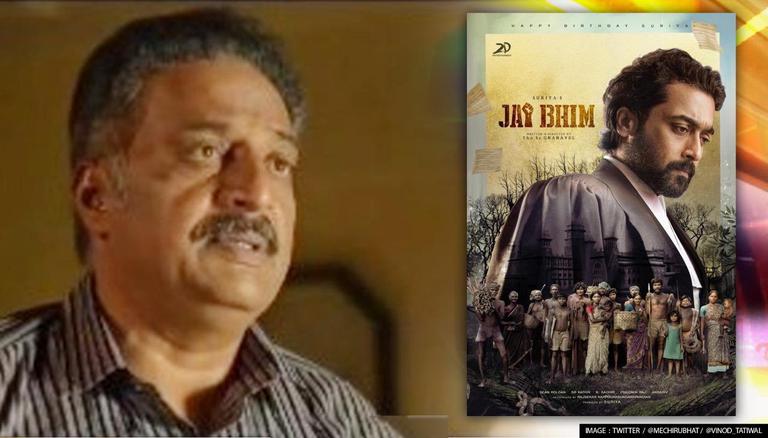 
The highly anticipated Tamil film Jai Bhim, starring Suriya, Prakash Raj, Lijomol Jose, K. Manikandan and others released on Amazon Prime Video on November 2. Although the film has received heaps of positive reviews, it also sparked a debate online. The courtroom drama featured a scene in which Prakash Raj, who plays a police inspector, slaps a man who speaks in Hindi and asks him to speak in Tamil. Here's what netizens had to say about the scene.

The scene involves Prakash Raj's character slapping a man who plays the role of a fake witness in a case. He speaks to Prakash Raj's character in Hindi, for which he is slapped and asked to converse in Tamil. Netizens have been debating about this scene since the film was released and some believe it should be cut out of the film, while others insist it is a part of the storyline.

In #jaibhim in This scene Prakash Raj slaps the person because he is a Tamil guy acting as Hindi speaking guy and being a fake witness in the case so he slapped him and told him to speak in tamil bu as usual bjp sanghi's given different spin narrative🤦pic.twitter.com/nvns1k8ZW4

A netizen called the scene a 'shameful act', posting a few stills from the scene, while another tagged the actor and asked him which article of the constitution allows him to do such a thing. The tweet read, "How many Kannadigas should hit u for speaking in Hindi, Tamil, Malayalam, Telugu in other movies?"

What a shameful act by Prakash Raj ? If anyone speak Tamil in North State , start slapping them. https://t.co/m7HMn9IJ8D

Dear Prakash Rai alias Prakash Raj, which article of the constitution provides rights to hit any individual just because he's not speaking Hindi or any Indian language?
If that's so, how many Kannadigas should hit u for speaking in Hindi, Tamil, Malayalam, Telugu in other movies? pic.twitter.com/y0GQrnX1Tf

I am really heartbroken after watching #JaiBhim, nothing against actor or anyone but felt really bad, there is a scene in the film where a person speaks Hindi and Prakash Raj slaps him and tells him to speak in Tamil

Honestly this kind of scene was not needed….Hope they cut it

Prakash Raj with his propaganda in the movie ‘Jay Bhim’ where he slaps a person who speaks in Hindi!

Meanwhile his profile pictures says it all and he gives many interviews in hindi,jokers are defending him.🤡 pic.twitter.com/H629bhMzlE

However, there were some netizens who believed that the scene was not meant to be an insult to the Hindi-speaking population in the country, but was a part of the plot of the film.

A netizen put forth their argument by explaining the meaning of the scene in the film and penned down its plot. Another Twitter user mentioned that several individuals were taking the scene 'out of context to fit their agenda'. They mentioned that fitting in an agenda here would only 'grow hatred, and create a divide between people in the country'.

Hi, the scene is not against Hindi-speaking Indians. The particular character tries to get away by speaking in Hindi (so that Prakash Raj wouldn't understand) and knowing this strategy, he slaps and asks him to speak in Tamil.Tamil filmmakers are not against the language Hindi1/2

Exactly, people are taking things out of context to fit their agenda. May be this person didn't have an agenda. But most people do and this precedence only grows hatred and divide people more.

No. You have taken him wrong. The character (Prakash Raj) doesn't know Hindi. So he slaps the man who spoke in hindi. It's in the story. It's not like Prakash doesn't like hindi. https://t.co/N2zikjyWM5