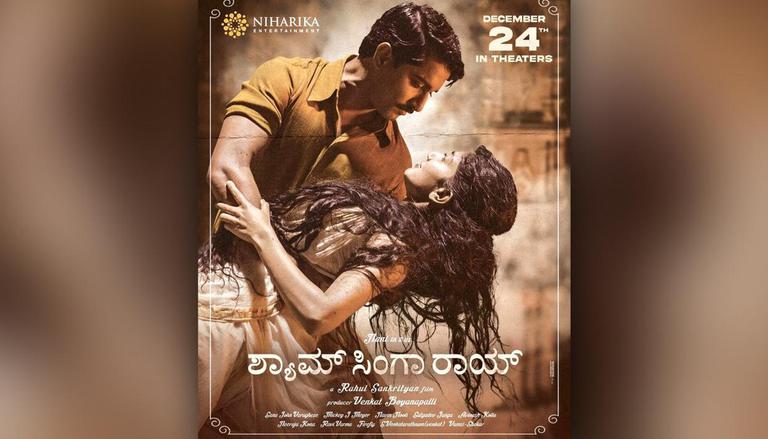 
After winning big at the SIIMA awards for his films Jersey and Gang Leader, Nani is set to give a commendable performance in his upcoming Telugu drama Shyam Singha Roy. The actor will co-star Sai Pallavi in the upcoming film. He recently unveiled this Telugu period drama's release date.

Taking to Instagram, Nani recently announced his upcoming film Shyam Singha Roy will release in theatres this Christmas. Nani shared an intriguing poster of the film featuring him in a brown shirt. He also sported a dashing moustache. On the contrary, Sai Pallavi stunned in a white saree and messy hairdo. The on-screen couple gave a romantic pose in the poster. Nani also revealed the film will be available in Tamil, Malayalam and Kannada. He wrote, "This Christmas Shyam will arrive where he belongs :) To the big screen and to your hearts. TELUGU, TAMIL, MALAYALAM, KANNADA." The film will hit the theatres on December 24, 2021. The actors' fans showered them with love and also asked for a Hindi dubbed version.

The film also casts Krithi Shetty, Madonna Sebastian, Ankith Koyya and Abhinav Gomatam in supporting roles. It is being helmed by Taxiwala fame Rahul Sankrityan. Venkat Boyanapalli is bankrolling the period drama under the banner Niharika Entertainment. Micky J. Meyer is serving as the music composer. The film's plot is reportedly set in Kolkata and revolves around the theme of reincarnation.

READ | 'Jersey': Shahid Kapoor reveals Nani 'inspired me to do this film'

Nani last starred in the Telugu family drama Tuck Jagadish. After many delays, the film debuted on the OTT platform Amazon Prime Video. Apart from Nani, the film also starred Ritu Varma, Jagapathi Babu, and Aishwarya Raj. Its plot revolved around two brothers whose loving bond is broken by their dead father's inheritance. While the elder brother tries to take away his younger brother's property, the younger one tries to reunite with their family and carry on his father's legacy. Nani also has several projects in his pipeline. One of them is the anthology film Meet Cute, along with another project with director Vivek Athreya. Nani is also planning to produce his films HIT and Awe's sequels.