Taking to Instagram, Pawan Kalyan’s wife Renu Desai shared a family picture as they all attended their son’s graduation. Check out the pictures. 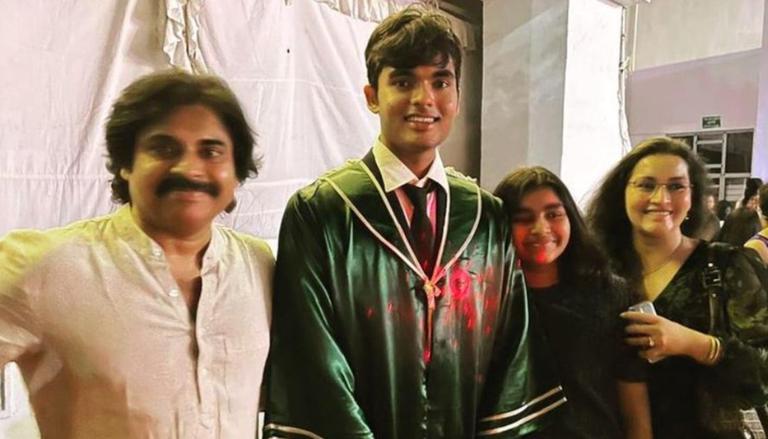 
Pawan Kalyan, the actor who is considered to be among the notable Telugu artists, recently attended the graduation ceremony of his son, Akira Nandan. As the actor’s wife, Renu Desai unveiled a blissful family picture of them together on their son’s special day, she even expressed her love to Akira while wishing him all the best for the future.

Pawan Kalyan's wife, Renu Desai recently took to her official Instagram handle and posted a picture in which she can be seen clicking a beautiful family moment together with her husband, Pawan Kalyan along with their son and daughter.

She even added a caption in which she exclaimed how proud they were as parents as their son graduated. Stating further, she even mentioned how there will be no more getting ready for school early morning, no more worrying about the bus timing, no more rushing to get the lunch packed on time, no more tuition, no more PTM, and no more school. Revealing what she told her son, Akira, she said that she told him that his true journey will begin from now on and added that she hopes he finds his own spot in the sunlight without needing the light of his parents.

The caption read, “An era ends and an era begins Proud parents of an amazing boy on his graduation day. No more getting ready for school early morning, no more worrying about the bus timing, no more rushing to get the lunch packed on time, no more tuition, no more PTM, no more school… I have told Akira that his true journey begins now and I hope he finds his own spot in the sunlight without needing the light of his parents. My little baby grew up really fast” (sic)

The actor was last seen in the Telugu action thriller film Bheemla Nayak which opened to positive reviews and garnered massive love from the fans. He is currently gearing up for his upcoming period action-adventure movie, Hari Hara Veera Mallu whose release was recently postponed due to the pandemic. It was earlier slated to release on 29 April 2022.