Ram Charan is a prominent artist in the Telugu film industry who recently tested positive for COVID-19. As it turned negative, he announced it online.

One of the established artists in the Telugu movie industry, Ram Charan was tested positive for COVID-19 recently as he announced it through his social media to all his fans. It was sad for all the fans to hear about Ram Charan’s health and sent best wishes to him and his family but as he shared an update on the current status of his health, all his social media fans were thrilled to hear about it. Let’s take a look at Ram Charan’s Instagram and see what the actor announced that delighted all his fans on social media.

Actor Ram Charan recently took to Instagram and posted two pictures of himself in which he can be seen wearing a white coloured kurta with a parrot sitting on his shoulders. The actor was seen with a delightful expression on his face as he announced through the caption that he had been tested negative for COVID-19. He also added in the caption how he was now back in action and added a symbol of biceps along with it. As Ram Charan’s health was provided on his Instagram handle a couple of weeks ago stating how he was tested positive for COVID-19 and requested everyone to get tested who had been around him for the past few days.

As Ram Charan's movies are a huge sensation among the fans, all his fans were happy to hear this news of him tested negative and commented with tons of hearts and kisses under Ram Charan’s Instagram post. Many of the other fans took to his Instagram handle and welcomed him back and even addressed him as a ‘mega covid warrior’. Some of them even complimented on how happy and stunning he looked in his latest pictures. Let’s take a look at Ram Charan’s Instagram post and see how his fans adorably welcomed him back. 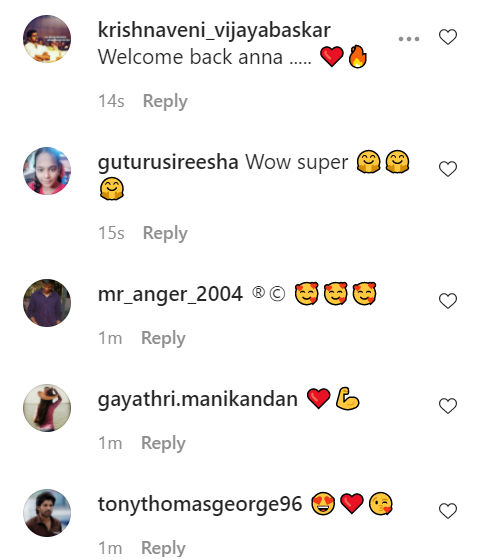 Also read Saina Nehwal Claims To Have NOT Received COVID-19 Report, Told To Isolate In Hospital

During Ram Charan COVID 19 quarantine days, he celebrated this new year. He took to his Instagram handle to wish everyone a happy new year and shared a sweet note with all his fans and family members. In the post, he expressed his appreciation for his family, friends, producers, directors and above all his dear fans who had been a constant source of happiness, enlightenment and strength. Talking about the previous year, he stated how it had been an unbearable and tough one for everyone in several ways but they have risen from it stronger and wiser. He then added that may the bond between everyone continue to grow and hope to continue to build as they enter the new year ahead.

Also Read Do You Know Ram Charan's Voice In Dhruva Was Dubbed By Ajay Devgn For Hindi Version?