R Madhavan recently took to his Twitter handle and penned an appreciation note for Ram Charan and Jr. NTR for their brilliant performance in RRR's Naatu Naatu 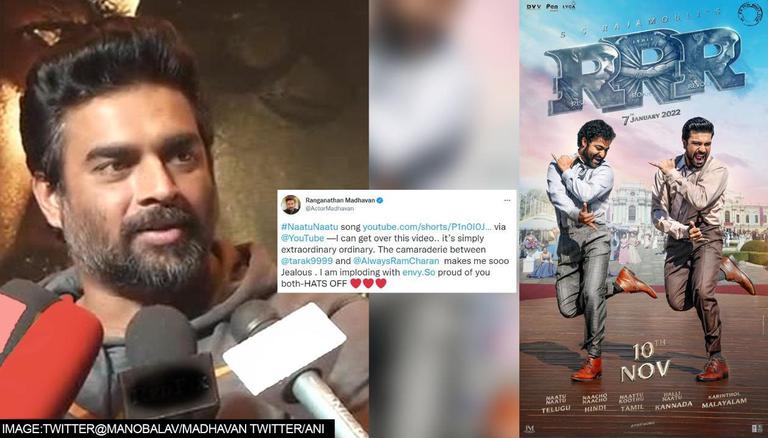 
RRR's electrifying dance number Naatu Naatu has left the audience spellbound ever since its release. The upbeat song is truly a power-packed anthem and the entire nation is grooving on the highly energetic beats of Naatu Naatu. The track is receiving a lot of love from the audience, as the song is all about Ram Charan's and Jr NTR's dancing prowess with high energy and pure synchronisation.

And recently, Tanu weds Manu actor R Madhavan took to his Twitter handle and praised the actors Jr.NTR and Ram Charan for their flawless dance moves.

After the release of Naatu Naatu, the entire nation is grooving on the song and social media is flooded with videos of artists showcasing their dance moves on this track. Jr NTR and Ram Charan who are known as the 'dancing dynamites' of the south proved that they are not just brilliant actors but they are excellent dancers too. Naatu Naatu song is touted as the 'mass dance number of the decade'.

#NaatuNaatu song https://t.co/66uwRR6W0c via @YouTube —I can get over this video.. it’s simply extraordinary ordinary. The camaraderie between @tarak9999 and @AlwaysRamCharan makes me sooo Jealous . I am imploding with https://t.co/Z6UWRxq7Fo proud of you both-HATS OFF ❤️❤️❤️

Taking to his Twitter account, actor Madhavan shared the video clip of Naatu Naatu song and captioned the post as -" #Naatu Naatu I can get over this video, it’s simply extraordinary ordinary. The camaraderie between@tarak9999 and @AlwaysRamCharan makes me sooo Jealous. I am imploding with envy. So proud of you both-hats off," and he ended it with heart emoticons. Fans too agreed with Madhavan's views on the song and they instantly jumped into the comments section and dropped fire emojis.

Few users also expressed their disappointment on the postponement of the most awaited mega-budget film RRR.

From the last few days, fresh insights about the COVID-19 resurgence with the Omicron variant have been reported and the authorities are imposing strict restrictions to curb the spread of the virus. Considering this the makers of RRR announced a few days back that the film's release will be on halt and despite relentless efforts, they were left with no choice but to postpone the release of the highly anticipated film. Fans are disappointed with the postponement news of RRR as after Pushpa: The Rise part 1's success, the audience was craving for some more action-packed content.

WE RECOMMEND
Watch 'RRR' stars Ram Charan, Jr NTR play read my lips on TKSS & leave Rajamouli in splits
Ram Charan to Jr NTR, here's how much the 'RRR' star cast charged for the magnum opus
Jr NTR and Ram Charan gear up for 'RRR' pre-release event in Mumbai; Take a look
Ram Charan reveals what he would like to say to 'Zanjeer' co-star Priyanka Chopra
'RRR': Ram Charan & Jr NTR give BTS glimpse on efforts for venture; fans say 'can't wait'
Listen to the latest songs, only on JioSaavn.com