Actor Vijay Deverakonda, who is currently shooting for his next film 'Liger', recently visited the Tirumala Tirupati temple along with his family. See pics here 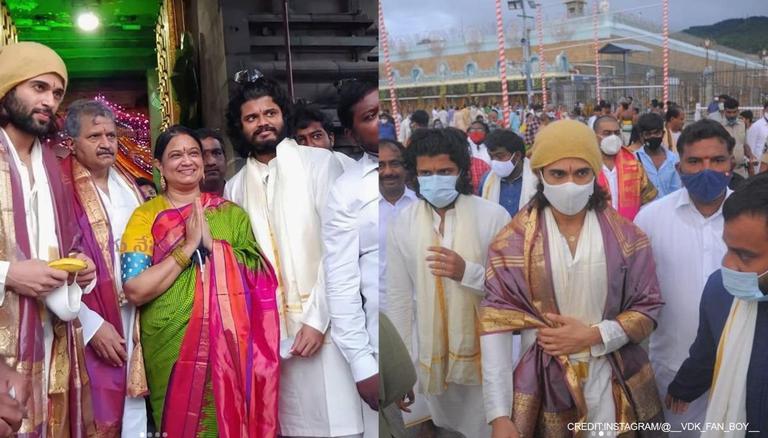 
Actor Vijay Deverakonda, who is currently shooting for his next film Liger, recently visited the Tirumala Tirupati temple along with his family. The Arjun Reddy star took some time off from his hectic schedule and visited the shrines with his parents and brother Anand Deverakonda. A few pictures of the entire family at the temple have been surfacing on the Internet.

In one of the pictures, Vijay Deverakonda is seen sporting a silk kurta set teamed with a beanie while his brother Anand can be seen wearing a similar outfit. The actor was seen smiling and waving at fans who gathered outside the temple to catch a glimpse of the star. Several fan pages of the actor shared the pictures on social media while hailing him for his love towards his fans.

Amid much speculations hovering around the release date of the upcoming film, Liger, Vijay in an interview with Bollywood Life assured his fans that the release date will be announced, however, the makers need some time to make the official announcement. He further revealed the reason behind the delay citing that the crew is waiting for their Visas to fly over to the US for a two-week schedule to shoot with veteran boxer Mike Tyson. He confirmed that the team will be moving forward with the announcement once the permission for Visas is granted.

Earlier, makers of the film announced roping in legendary boxer Mike Tyson for a special appearance. The duo is expected to lock horns in the film hinting at the major showdown between the two boxers in the film. Apart from Vijay and Mike Tyson, actors Ananta Panday, Ramya Krishnan, and Ronit Roy are set to play significant roles in the film.  With no official release date announced, the movie will release in Telugu, Hindi, Tamil, Kannada, and Malayalam. The film is reportedly based on a Mixed Martial Arts expert. Meanwhile, Anand Deverakonda has wrapped up the shooting of his upcoming film, Highway. Directed by KV Guhan, the film is a psychological crime thriller.