Vijay's 'Master' Gets Special Emoji On Twitter, Film All Set To Release On Pongal

Vijay’s 'Master' will release in theatres on 13 January, 2021, on the occasion of Pongal, and Twitter India on Friday released a special emoji.

Vijay’s Master will release in theatres on 13 January, 2021, on the occasion of Pongal, the makers announced a few days back and also shared a new poster from the film.

Master will simultaneously release in Tamil, Telugu and Hindi. The Hindi version of the movie has been titled Vijay The Master. 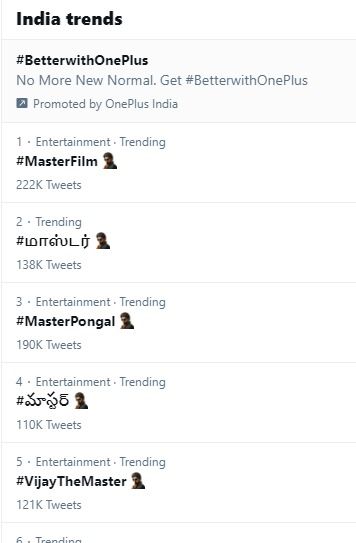 This film, which is being made on a huge budget, is the first one of the sort to release on the silver screens post the lockdown. According to a report by Pinkvilla, the movie received the U/A certification from the Central Board of Film Certification (CBFC).

The film was meant to release in summer 2020 but it was delayed due to the pandemic. There are also reports of Vijay having met the Tamil Nadu Chief Minister to request him to allow the full functioning of theatres. The film will be released in Tamil, Telugu, Hindi, Kannada and Malayalam languages.

The film is helmed and written by Lokesh Kanagaraj. Master cast includes Vijay Sethupathi, Malavika Mohanan, Arjun Das, Andrea Jeremiah and Shanthanu Bhagyaraj. The music for the film has been composed by Anirudh Ravichandran.