Popular actor Kamal Haasan is gearing up for the release of 'Vikram', in which he will take on a lead role alongside Fahadh Faasil and Vijay Sethupathi. 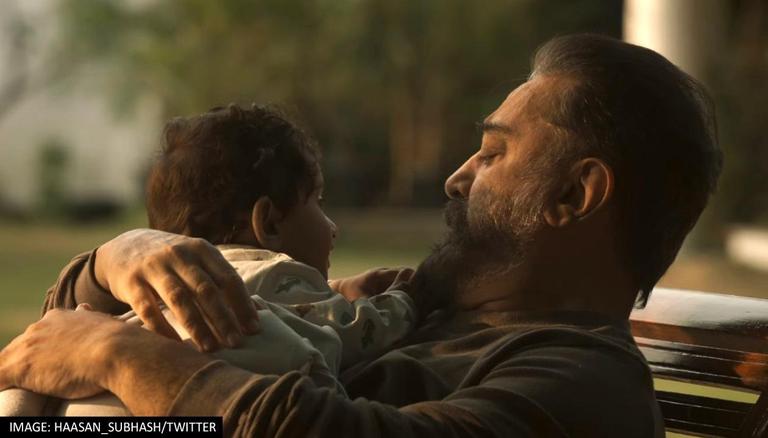 
Popular actor Kamal Haasan is currently gearing up for the release of his much-awaited film Vikram, in which he will take on a lead role alongside Fahadh Faasil and Vijay Sethupathi. The makers of the film piqued fans' interest in the movie as they released a melodious track titled Porkanda Singam for the film ahead of its release. The Vikram release date is scheduled for June 3, 2022, and fans can't wait to watch the film on the big screen.

The makers of the film released the Vikram song Porkanda Singam on YouTube and gave fans a glimpse into what they can expect from the movie. The Vikram trailer showed the audience an action-packed glimpse of the film, while the Porkanda Singam video gave them a look at an all-new side of Kamal Haasan's character in the film. The actor is shown as a sweet, nurturing and tender man, as he looks after a young toddler. He is seen putting the child to sleep and tending to them in a caring manner. The audience also sees a tear streaming down the actor's face in one of the scenes. Composed by Anirudh Ravichander, the song is an emotional track and will be sure to add meaning to the plot of the film.

The recently released Vikram trailer gave fans a peek into what they can expect on the big screen. It featured Kamal Haasan, Vijay Sethupathi and Fahadh Faasil in some high-octane stunt scenes and promised an action-packed watch for viewers. The trailer's hard-hitting dialogues also packed a punch and fans can't wait to watch the film on June 3, 2022.

Kamal Haasan recently made his way to the prestigious Cannes Film Festival, where he launched the NFTs of his film Vikram. He earlier took to Twitter to make the exciting announcement and got his fans at the edge of their seats, eagerly waiting to get a glimpse of the film in the Metaverse. He wrote, "Vikram forays into the Metaverse. The much-awaited Vikram NFTs will be revealed today at Cannes Film Festival 2022"

Vikram forays into the Metaverse.
The much awaited Vikram NFTs on https://t.co/0t68cOrzW5 will be revealed today at Cannes Film Festival 2022.#VikramFromJune3 #VikraminMetaverse #VikramNFT #Cannes2022 pic.twitter.com/kjTrwVw1lK