Karan Kundrra may have rubbished the breakup rumours with girlfriend Anusha Dandekar but the latter recently praised a scene from Four More Shots Please.

However, the twist lies in the fact that the particular scene in question was a wife catching her husband cheating on her. Interestingly, the scene from Four More Shots Please season 2 also featured Anusha Dandekar's sister Shibani Dandekar who plays Sushmita Sengupta in the show and catches her husband played by Samir Kochar cheating on her with another woman essayed by Kirti Kulhari. Anusha Dandekar shared a still of Shibani from the scene on her social media.

However, it was Anusha Dandekar's caption which grabbed many eyeballs. Anusha Dandekar captioned the image as, '#Sisterrrr Busted, #LifeIsYou'. It may be interesting to think if there was any connection between Anusha Dandekar praising the Four More Shots Please scene with her alleged split with Karan Kundrra. Check out Anusha's Instagram story. 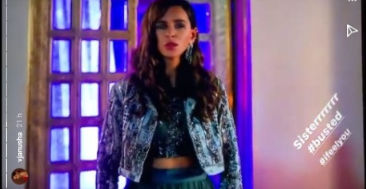