Kavita Kaushik, television actor Kamya Panjabi's best friend shut down a troll who questioned the latter's second wedding despite having a daughter. Read below

Television actress Kamya Panjabi just yesterday tied the knot with her Delhi-based boyfriend Shalabh Dang. Taking to Instagram, she posted pictures from her Haldi and Mehendi ceremony and several congratulatory messages poured in from colleagues, fans and social media users.

However, one user questioned the 40-year-old actress's decision to remarry despite having a daughter. The comment read,  “You already have 2 children so why you do it? I mean Phir Shadi ?” (Marriage, again?) And while Kamya did not respond to the troll, her friend and television actor Kavita Kaushik jumped to her defence. She replied saying that 'there is life beyond producing children', and that one should not find faults in people who are trying to build their lives and find happiness.' She also added that Kamya's daughter Aara supported her mother throughout and 'planned most of the celebrations'. See her comment below- 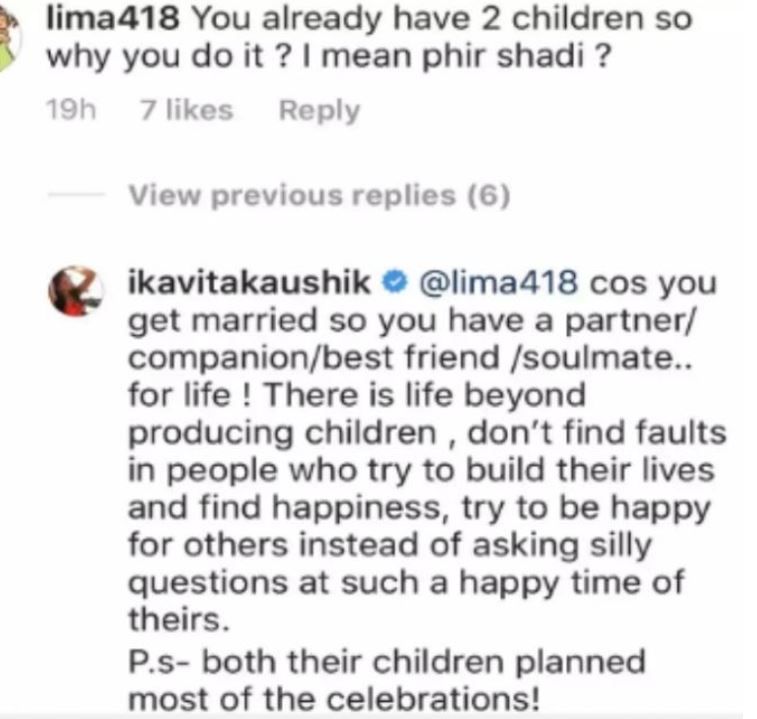 READ: Kavita Kaushik Doing Complicated 'Asanas' Is All The Yoga Inspiration That You Need

In an earlier interview with a leading media publication, Kamya stated that people often told her that she should consider herself lucky that her husband-to-be (Shalabh Dang) was ready to 'accept' her. Highlighting that the statement irked her as she was made to feel 'not good enough' because of being a single parent.

Kamya was previously married to businessman Bunty Negi, but the couple parted ways in 2013. The actress also has a 10-year-old daughter Aara and was doubtful about having a relationship again, as claimed by her in several interviews. Meanwhile, in a career spanning nearly two decades, Kamya has been a part of several popular television shows like Astitva...Ek Prem Kahani, Banoo Main Teri Dulhann and Maryada: Lekin Kab Tak?. She also appeared in season 7 of the reality show Bigg Boss.

READ:  Kavita Kaushik Doing Complicated 'Asanas' Is All The Yoga Inspiration That You Need

READ: "It Seems To Have Become An Assault To My Sense Of Taste", Says Kavita Kaushik On Quitting Facebook