Rajeev Sen, who enjoys a massive fan following on social media handles, took to his Instagram handle to share an unmissable picture with his wife, Charu Asopa.

Recently, Bollywood actor Sushmita Sen’s brother, model Rajeev Sen took to his Instagram handle to post pictures with his wife, actor Charu Asopa. Sharing several mushy pictures with Charu, Rajeev Sen penned a heartwarming caption in Hindi, which roughly translates to: ‘What is there in the world except for your eyes’. Take a look at Rajeev’s post:

In the pictures, Charu Asopa and Rajeev Sen can be seen flashing their big smiles as they pose happily together. In another picture shared, Rajeev is seen hugging his dog, while Charu is seen planting a quick peck on his forehead. Soon after Rajeev posted the picture, fans rushed to the comment section and showered their blessing on the happy couple. Take a look at how fans reacted to the post: 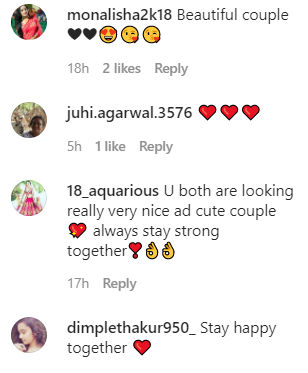 Rajeev recently gave his fans a glimpse of his upcoming vlog in an Instagram post. The model shared a few pictures which feature Charu hugging their pet, while he glares at her with love. Take a look at the post shared:

My new vlog “ Much awaited vlog with wife “ is Live in my youtube channel.. Thank u for all your love ðŸ’• Link is in the Bio ðŸ§¿â¤ï¸

All about Rajeev and Charu

Reportedly, Rajeev Sen is a model and has walked the ramp for several fashion designers. On the other hand, Charu Asopa is an Indian TV actor, who shot to prominence with her performance in Akbar Ka Bal.. Birbal. Starring Ali Asgar and Vishal Kotian as Akbar and Birbal respectively, the show is a historical comedy show that airs on Star Bharat. Based on folktales of mighty Mughal Emporer Akbar and his witty and trusted courtier Birbal, the much-loved show revolves around Akbar and Birbal's friendship. This drama is produced by Nikhil Sinha under the banner of Triangle Film Company.